The awards will fund research led by Principal Investigator Jeffrey Kordower, each targeting underlying causes of the disease, which currently affects nearly 1 million people in the U.S. alone.

The new projects focus on two primary hallmarks of Parkinson’s disease: the loss of dopamine-producing neurons in the brain and the accumulation within nerve cells of a misfolded form of the protein alpha-synuclein (α-syn). 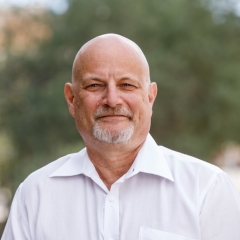 Kordower is the founding director of the ASU-Banner Neurodegenerative Disease Research Center at Arizona State University and the Charlene and J. Orin Distinguished Director at the Biodesign Institute.

Parkinson’s disease is a leading neurodegenerative ailment, whose symptoms include rigidity, tremors and difficulty with balance and walking. In many cases, problems with movement are accompanied by serious cognitive impairment, including dementia.

Currently, the number of patients living with Parkinson’s disease exceeds those living with multiple sclerosis, muscular dystrophy and ALS (Lou Gehrig’s disease) combined. By 2040, the disease is expected to affect 14 million individuals worldwide.

While some treatments exist for the constellation of movement disorders common in Parkinson’s patients, the most crippling aspect — severe cognitive impairment — remains untreatable at present.

“Professor Kordower’s approaches to the treatment of this devastating affliction qualify as truly revolutionary,” said Joshua LaBaer, executive director of the Biodesign Institute at ASU. “The brain is our most critical organ, essential to all bodily function as well as the repository of our selfhood. Replacing disease-damaged cells and selectively targeting disease-linked protein accumulations are techniques rapidly moving from the realm of science fiction to science fact.”

Although a variety of genetic mutations are associated with the disease, few of these are hereditary, occurring in just 10–15% of patients. In some cases, environmental factors, including head injury or pesticide exposure may be involved. For most, the exact causes of the disease remain shadowy.

Though many mysteries persist, two hallmarks of Parkinson’s disease have long been recognized. The first is loss of the vital neurotransmitter dopamine in a brain region called the striatum.

Among its many functions, dopamine is used to ferry information between nerve cells. The dopamine system is involved in both movement and emotional response to stimuli, and is essential for physical and mental well-being. Parkinson’s disease destroys dopamine-producing, or dopaminergic, neurons in a specific region in the midbrain, known as the substantia nigra.

The second hallmark of the disease is the accumulation within nerve cells of α-syn. While this protein is necessary for proper brain function, an overabundance of α-syn, in an aberrant, misfolded form, can wreak havoc in the nervous system. Once α-syn pathology has taken root in a single cell or small cluster of cells, the process spreads like a contagion to neighboring cells, which in turn begin producing aberrant α-syn in a destructive cascade.

It is believed that deregulated dopamine levels and accumulating α-syn act synergistically in a vicious cycle, causing synaptic dysfunction and progressive neurodegeneration. In addition to treating the motor effects of the disease, a therapy targeting excess α-syn holds the promise of arresting the transition to Parkinsonian dementia.

Neuronal loss in the brain is responsible for a broad range of serious afflictions, many associated with advancing age, a primary risk factor. Unlike other cell types in the body, neurons in most cases do not naturally regenerate. The large-scale depletion of neurons caused by Parkinson’s disease results in increasing physical decline.

Researchers continue to explore strategies designed to protect neurons from the ravages of Parkinson’s and other neurodegenerative diseases. But what if depleted neurons could be replaced with fresh, dopaminergic neurons? This is the rationale behind two of the new studies.

Kordower has been on the forefront of research into so-called neural grafting, in which stem cells are directly implanted in the brain. Earlier research by Kordower and others has demonstrated that under proper conditions, implanted cells can develop into the appropriate form of functional neuron, spread their nervous tentacles through damaged tissue, reconnect circuitry disabled by disease and restore function.

The delicate techniques involved in successful neural grafting are still being optimized but encouraging data have electrified the research community and could provide momentous advances in the fight against Parkinson’s and other neurodegenerative diseases. 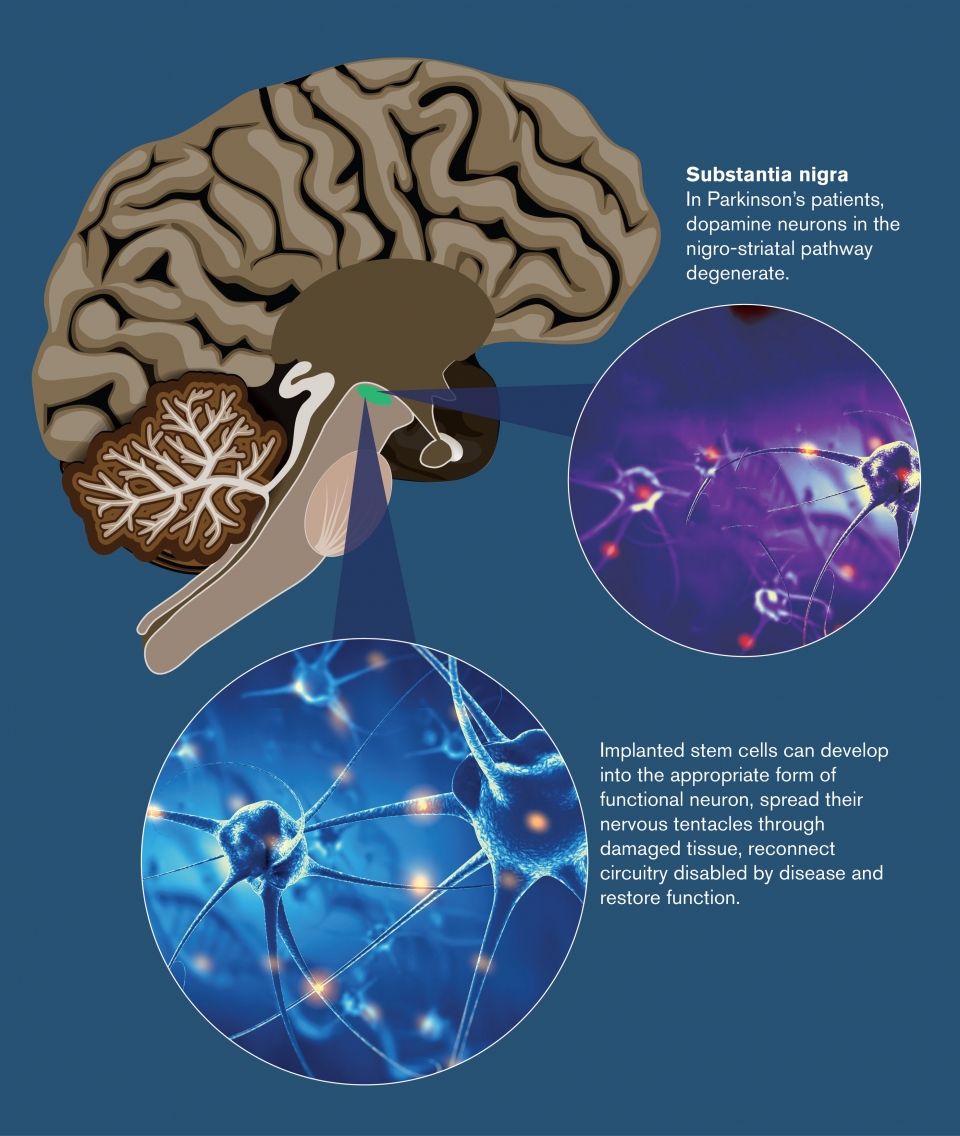 The above graphic shows the implanting of stem cells in a region of the brain known as the substantia nigra.

The first study is a human clinical trial, in collaboration with several centers, including the Barrow Neurological Institute in Phoenix. The approach involves infusing specially designed stem cells into the striatum where dopamine is lost. This project will be conducted in collaboration with Patrik Brundin with the Van Andel Institute, Michigan, and Virginia Mattis with Fuji-CDI, Wisconsin.

Unlike neurons and other highly specialized cell types, stem cells have the remarkable ability to develop into any cell type in the body, under proper conditions. The stem cells used for the brain implants begin their lives as blood cells. A laboratory treatment process causes these cells to undergo de-differentiation into stem cells known as induced pluripotent cells.

Research has shown that implanted cells of this type can recognize their location in the brain, develop into the proper cell type — in this case, nigral neurons — and begin dispensing dopamine, just as their naturally-occurring counterparts did before they were destroyed.

Patients who receive one or two doses of cells will be evaluated using PET scans and will be periodically re-examined to identify any adverse effects of the procedure and to assess the effectiveness of the therapy in treating symptoms of the disease. This method may not be effective in all cases of Parkinson’s, especially those who received the treatment too late because their brains were too severely damaged by the disease to recover. Because of the complexity of Parkinson’s disease, other factors may be undermining the dopamine system, and teasing out the results is challenging.

The current study aims to clarify and fine-tune the implantation approach by selecting patients with perceptible deficit due to Parkinson’s disease but not so severe that the damage is irreparable. Secondly, the study will attempt to simplify the picture by focusing on a select subset of Parkinson's patients, namely those with a specific mutation known as a Parkin mutation.

Parkin is a genetic mutation that causes the motor deficits seen in spontaneously occurring, or idiopathic, Parkinson’s disease. Unlike these patients, however, those with Parkin mutations typically display only the classic Parkinsonian symptoms because their disease is pathologically limited to degeneration of the dopamine system. This makes them ideal subjects for a clinical trial to restore dopaminergic cells in the striatum.

“We can transplant stem cells that are, by all accounts, like the nigral neurons that die in Parkinson’s disease,” Kordower said. “They have the same chemical properties; they have the same genetic material that tells them where to go.”

Patients receiving the new cells are expected to show improvements in symptoms in six to 12 months. Successful results in the clinical trial of Parkin mutation cases will thereby encourage further trials in a wider population of Parkinson’s patients.

The second study takes on an even more radical approach to addressing dopamine deficit. This recently discovered technique also aims to produce dopaminergic neurons to replace those depleted in the substantia nigra, but instead of inducing laboratory stem cells to become neurons and then implanting them, the technique converts supportive cells in the brain known as astrocytes into dopaminergic neurons.

Although neurons in the brain often grab most of the attention in the neuroscience community, astrocytes are an underappreciated cell type with many important functions in the central nervous system. They help maintain the blood-brain barrier, modulate neuroinflammation and release factors that stimulate the growth of nervous tissue.

Astrocytes are attractive cell candidates for reprogramming as they lie in the neural vicinity of neurons and are liberally distributed throughout the brains of all mammals. Indeed, the astrocyte population accounts for about half of the total cells in the brain.

Researchers have found that treating astrocytes to deplete a specific RNA-binding protein known as PTB can induce these cells to transition into new neurons capable of repopulating neural circuits damaged by disease. The current study will advance the quest to successfully convert midbrain astrocytes to dopaminergic neurons, reconstitute injured nigrostriatal circuits, restore proper dopamine levels and prevent or reverse the characteristic symptoms of Parkinson’s disease in a pre-clinical animal model of Parkinson’s. These experiments will be guided by Fluorodopa PET scan imaging, which will be done in collaboration with the Barrow Neurological Institute.

Housekeeping in the brain

The last of the three projects, in collaboration with ASU-Banner co-principal investigators Anne Messer and David Butler, of the New York Stem Cell Institute, targets α-syn accumulation in the brain, using a gene therapy technique. Here, a kind of engineered antibody known as a nanobody will be introduced to reduce α-syn.

One goal of the pre-clinical study is to demonstrate that nanobodies can successfully transduce cells throughout the brain, target accumulations of α-syn, bind with them and shuttle them to a cell structure known as the proteosome, where they are destroyed, much like a corrupted file being dragged to the garbage icon on a computer desktop.

Researchers are hopeful that global expression of the nanobodies following their injection in the cisterna, a region near the brainstem, will result in decreased α-syn load in specific areas of the cerebral cortex associated with cognitive decline in Parkinson's disease.

Biodistribution and proper functioning of nanobodies will be further explored using a human brain organoid system in the laboratory. Should the technique prove successful, researchers plan to pursue FDA approval for its use in clinical trials under Investigative New Drug status.

Top image: Among its many functions, dopamine is used to ferry information between nerve cells. The dopamine system is involved in both movement and emotional response to stimuli and is essential for physical and mental well-being. Parkinson's disease destroys dopamine-producing, or dopaminergic, neurons in a specific region in the midbrain, known as the substantia nigra. Image courtesy of The Biodesign Institute at Arizona State University