Associate Professor Brenda J. Baker has been teaching anthropology at ASU for 33 years.

“I love the process of discovery,” Baker said. “While in the field in remote places, I learn about the modern culture as well as those of the past. In the lab, I piece together the fascinating stories of lives lived long ago.”

Baker also directs the Bioarchaeology of Nubia Expedition in northern Sudan, analyzing human remains and artifacts as well as the larger landscape.

World Anthropology Day is celebrated annually on the third Thursday of February as a day to recognize the discipline and share it with others. The American Anthropological Association helps promote celebrations at universities, schools and museums across the U.S.

Associate Professor Christopher Campisano’s area of focus is evolutionary anthropology. He’s been teaching it for more than 10 years. He said he was drawn to anthropology because of his love of natural history and travel. He challenges students to come up with topics that cannot be incorporated under the umbrella of anthropology in some way.

Student Morgen Schreiner is also pursuing degrees in anthropology and history. She was interested in archaeology at a young age, having discovered arrowheads on her family’s farm after they plowed the fields. 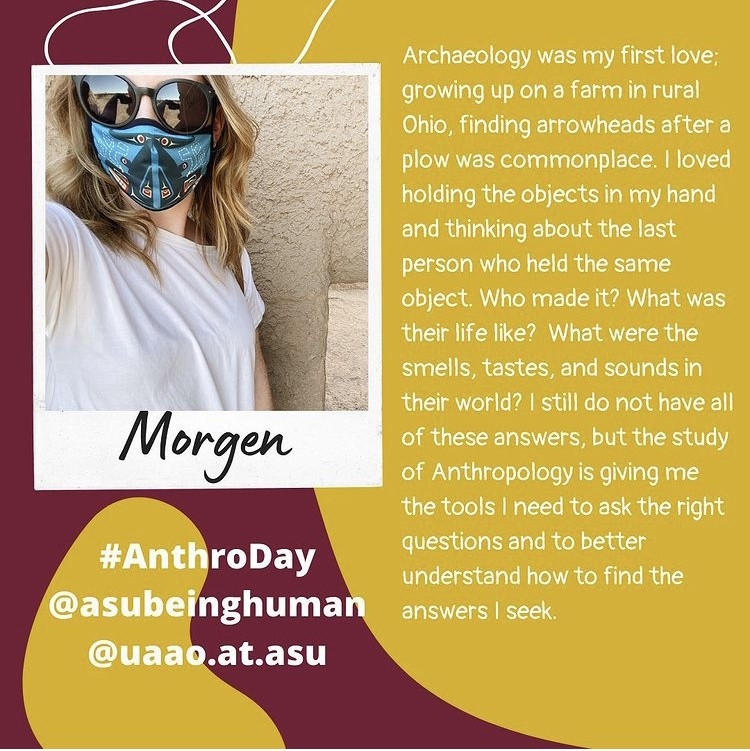 “I loved holding the objects in my hand and thinking about the last person who held the same object,” Schreiner said. “Who made it? What was their life like? What were the smells, tastes and sounds in their world?”

To continue the celebration, the school also hosted an anthropology-focused virtual movie night, where students watched Netflix’s new original movie “The Dig” and enjoyed a discussion about the film with Joel Palka, an archaeologist and associate professor. “The Dig” tells the story of a major archaeological find in England as the country prepared for World War II.

February’s event brought together students from both the on-campus and online anthropology programs, something the school plans to continue at future events.

Anthropologists study the human experience in the past and present, including our evolution, culture and behavior. The interdisciplinary School of Human Evolution and Social Change also offers degrees in global health, environmental social science and applied mathematics for the life and social sciences.