NASA’s Jet Propulsion Laboratory has announced that Professor Meenakshi Wadhwa, director of Arizona State University's School of Earth and Space Exploration, has been appointed as the Mars Sample Return (MSR) program scientist. In this role, Wadhwa will be responsible for the scientific integrity and the overall scientific success of the program.

“Professor Wadhwa is a world-renowned planetary scientist with significant expertise in the scientific analysis and curation of space samples. I couldn’t imagine a better person to take this role at this critical time in the Mars Sample Return program,” said Bobby Braun, director for planetary science at JPL. “The JPL team is excited to work closely with Professor Wadhwa over the next several years on this history-making mission for humanity.”

The Mars Sample Return program, which is being planned jointly by NASA and the European Space Agency, will return samples collected by the Perseverance rover from the surface of Mars to Earth by way of a Sample Retrieval Lander (SRL) and an Earth Return Orbiter (ERO). Launch dates for both the SRL and ERO missions are anticipated to be in the 2026–2028 timeframe, with samples of Martian rocks, soils and atmosphere returning to Earth as early as 2031 for detailed laboratory analysis.

“As the MSR program scientist, I will be working with an amazing team of scientists and engineers on the audacious goal of bringing back the first samples from another terrestrial planet,” Wadhwa said. “We’ve learned a lot about the red planet from the increasingly sophisticated robotic spacecraft we have sent there. Sample return is the next logical step in exploring the geologic, and the possible biologic, evolution of Mars, and these samples will be available for future generations to study.”

In her capacity as MSR program scientist, Wadhwa will also work closely with the Mars 2020 science team, NASA headquarters’ MSR program lead scientist and the European Space Agency’s MSR lead scientist to shape the scientific strategy and ultimate execution of the MSR campaign. Wadhwa has also been named a JPL Distinguished Visiting Scientist.

“Professor Wadhwa’s passion and expertise are the perfect fit for this role and continues our decades-long history of space exploration to the red planet,” ASU President Michael M. Crow said. “Her work in planetary science means she will help ensure that the Mars Sample Return mission is as scientifically valid as it is technologically ambitious. In so many ways, her work and this mission parallel one of the university’s central themes: What’s next? Next in science, next in education, next for human exploration. Mars exploration is that next.”

Video of NASA advances plans to bring samples back from Mars

In addition to serving as director of the School of Earth and Space Exploration, Wadhwa is an isotope cosmochemist and previously served as the director of ASU’s Center for Meteorite Studies from 2006 to 2019. She was president of the Meteoritical Society in 2019–2020 and an asteroid, “8356 Wadhwa,” was named for her in recognition of her contributions to meteoritics and planetary science.

“My scientific career began with studying the Martian meteorites, which are the only samples of Mars currently available to study in laboratories here on Earth,” Wadhwa said. “In a sense, this new role with MSR makes me feel that much closer to my ultimate dream of being an explorer on Mars.” 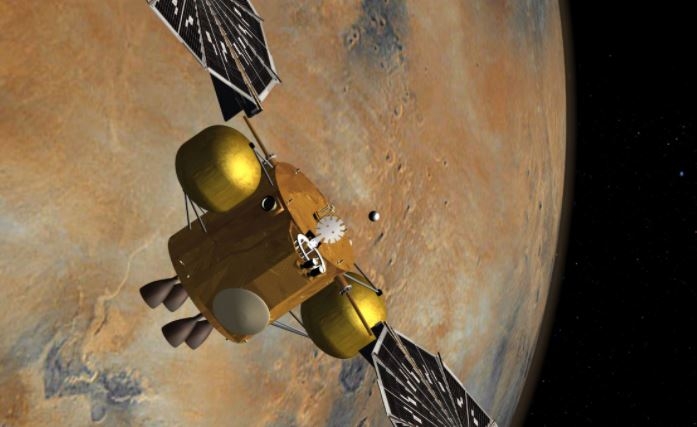 An artist's concept of the proposed Mars Sample Return mission portraying the capture of a collection of Martian samples by a spacecraft orbiting Mars. Credit: NASA/JPL-Caltech

Wadhwa has served on numerous advisory committees for NASA and the National Academies of Science, Engineering, and Medicine, and currently chairs the science committee of the NASA Advisory Council. She is also a recipient of the Fulbright-Nehru Academic and Professional Excellence Award (2015), the Guggenheim Fellowship (2005) and the Nier Prize of the Meteoritical Society (2000). In 2018–2019, she was awarded an American Council on Education Fellowship and she is a fellow of the American Geophysical Union, and a geochemistry fellow of the Geochemical Society and the European Association of Geochemistry. She was awarded the J. Lawrence Smith Medal by the National Academy of Sciences in 2021.