The book, titled "Ignored Racism: White Animus Toward Latinos" and co-authored with Iowa State Professor David A.M. Peterson, takes a deep dive into how prejudice towards Latinos is commonly expressed as well as the implications of this Latino-specific prejudice on issues including immigration, voting rights, criminal punishment, policing, and elections.

An associate professor in the School of Politics and Global Studies, Ramirez is also a faculty affiliate of the Center for Latina/os and American Politics Research.

Ramirez spoke with ASU News about his recent book, which will be recognized at the upcoming annual meeting of the American Political Science Association held Sept. 30–Oct. 3. 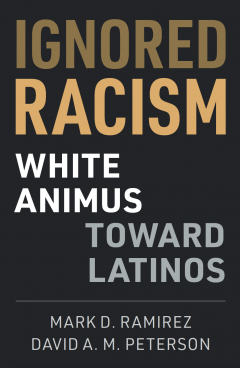 Question: How might looking at the attitudes white Americans have towards Latinos help us better understand contemporary American politics?

Answer: There are some issues that are inherently connected to Latinos living within the United States. Immigration, guest worker programs, border security are ones that most people would recognize. We show that prejudice towards Latinos strongly relates to preferences on these types of issues for between 35% to 50% of the public. But there are also a number of issues that are supposedly race-neutral that are very racialized. These include issues such as crime control, policing and voting rights. Historically, we knew these issues were related to how people felt about Blacks, but we show that beliefs about Latinos are now just as important. The book forces us to think about how anti-Latino prejudice affects American politics more broadly than simply looking at the immigration debate.

Q: How do beliefs about Latinos become connected to an issue such as voting rights?

A: Americans are making the connection between voting rights and Latinos because of real-world demographic changes and messaging by political leaders that make explicit connections between Latino populations and the need for restrictions on voting. As the Latino population within the United States increases and more become eligible to vote, those people threatened by this change see restrictions on voting rights as a means to maintain their dominance. But the threat of political change itself is not enough to get people to endorse anti-democratic voting policies. Instead, it has to be coupled with preexisting prejudice toward Latinos.

Q: Why does the political debate revolving around Latinos in American society focus on how well Latinos are assimilating to Anglo-American cultural norms?

A: This is historical. The first generations of white, European settlers viewed the various Native peoples as having an inferior culture, and this narrative attached itself to the subsequent mestizo and Latino populations. This perception is partly from natural in-group/out-group differences in how we perceive other cultures, but it was also a strategic play to keep non-Europeans from holding political power. If Latino culture is inferior, then its people were deemed unfit to lead or hold public office. Laws were created to prevent them from doing so. And these discriminatory institutions in turn restricted how Latinos lived, which reinforced these negative stereotypes. In reality, the science shows Latinos assimilate quite well and often better than other immigrant groups have done.

Q: Based on your research, in what ways do you think that racism-ethnicism toward Latinos impacts elections and voting? Did you find this to be a partisan issue?

A: We found Latino racism-ethnicism, which is how we label prejudice toward Latinos because the content is about race and ethnicity, was an important factor in Senate, gubernatorial and presidential elections in 2014 and 2016 — the years we did our national surveys. People harboring racism-ethnicism toward Latinos were more likely to vote for candidates who campaigned on restrictive and anti-capitalist immigration policies. Our data were also suggestive in that people harboring racism-ethnicism toward Latinos were less likely to vote for Latino candidates in House races. We observed these effects for both Democrats and Republicans who held prejudicial beliefs toward Latinos, although those beliefs are more prevalent among members of one party.

A: The best way might not be through trying to change attitudes, but making sure there are strong institutions — checks and balances that ensure minority rights. This was the approach of the founders, and they were right. Attitudes, especially those relating to prejudice, can be sticky. But strong norms against racism, changing the narrative about Latinos and having political leaders that don’t play to our lowest instincts would all go a long way in attenuating the role that anti-Latino prejudice plays in politics.