NASA’s Mars 2020 Perseverance rover is the most sophisticated rover NASA has ever sent to the red planet. One of the main tasks of this mission is to collect carefully selected and documented rock and sediment samples for future return to Earth. Once collected, NASA’s Mars Sample Return (MSR) program will be responsible for bringing the samples to our planet for further research.

The Mars 2020 Perseverance rover’s home is Jezero Crater, a large impact crater about 28 miles wide (45 kilometers wide) just north of the Martian equator. Jezero once contained a lake, which scientists think is one of the most ideal places to find evidence of ancient microbial life, if any ever formed on Mars.

Onboard the rover is the ASU-led mast-mounted camera system ‘Mastcam-Z,’ which can zoom from wide angle to telephoto, take 3D images and videos, and take photos in up to 11 unique colors. This allows the camera team to spot important samples for the rover to core and cache on the surface of Mars, for eventual return to Earth.

On Sept. 1, data received from NASA’s Perseverance rover indicated that a Mars rock had been successfully cored by the rover’s sampling and caching system, and that the sample was intact. Images taken from the Mastcam-Z instrument showed the end of a cored rock within the sample tube. Then, the rover began a procedure which vibrates the drill bit and tube. This action can cause a sample to slide down further into the tube. Due to poor lighting, the sample was initially not visible in the tube after this procedure.

On Sept. 6, NASA announced that the Mastcam-Z camera instrument was able to image the contents of the still-unsealed tube and transmit the results back to Earth. Once the presence of the core was confirmed, mission controllers sent a command to complete processing of the sample. Perseverance then sealed and transferred the sample tube into the rover’s interior, making it available for retrieval in the future.

"It was an honor and a thrill for the Mastcam-Z team to be asked to play such an important role in ensuring that there was indeed a rocky core sample captured during the Perseverance rover's latest sampling attempt,” Bell said. “Our operations staff worked directly with the NASA rover arm engineers to align the coring tube just right with our cameras, and to set the timing just right to get sunlight shining down the tube and onto the core. It was a great rover-wide collaborative effort."

The Mars rock from which the sample was taken has been nicknamed “Rochette.” The rock is described as briefcase-sized, while the core sample itself is about the size of a typical dry-erase marker.

This composite of two images shows the hole drilled by NASA's Perseverance rover during its second sample-collection attempt. The images, which were obtained by one of the rover's navigation cameras on Sept. 1, 2021, were taken in the "Crater Floor Fractured Rough" geologic unit in Mars' Jezero Crater. Credit: NASA/JPL-Caltech

Of the many questions scientists hope to answer with this and other samples, the biggest is if there was ever life on Mars. They also hope to more fully understand the geologic and climate history of the planet.

But first, they need to get the samples back to Earth. That will be the job of the Mars Sample Return Program, which is being planned jointly by NASA and the European Space Agency (ESA). As the principal scientist for MSR, Wadhwa is working closely with the Mars 2020 team as they determine how samples will be selected and collected.

“I've dreamed of being able to bring back and study samples of Mars in my laboratory since I was a graduate student,” Wadhwa said. “But this is the first time it feels real, that it's actually going to happen in the foreseeable future. It’s incredible to know that we have a rover on Mars right now that’s collecting samples.”

While Wadhwa has studied meteorites from Mars, they are considered a biased sample because scientists can’t determine exactly where on Mars they originated and so there is no geologic context for them.

“Many of the samples from Mars that have fallen to Earth as meteorites have been sitting around on Earth for many years and so Earthly contamination permeates these rocks,” Wadhwa said. “With samples collected by the rover from a known specific locality on Mars, we will have access to pristine materials with geologic context. And once we return these samples to Earth, the international community of researchers will be engaged in studying them with the full arsenal of state-of-the-art analytical capabilities at our disposal here in terrestrial laboratories.”

The MSR program will return samples collected by the Perseverance rover from the surface of Mars to Earth by way of a Sample Retrieval Lander (SRL) and an Earth Return Orbiter (ERO). Launch dates for both the SRL and ERO missions are anticipated to be no sooner than 2026, with samples of Martian rocks, soils and atmosphere returning to Earth as early as 2031 for detailed laboratory analysis.

“Bringing back the samples from Mars will be an historic moment in space exploration,” Bell said. “We have moon rocks, of course, from the Apollo missions, but bringing back samples from Mars, another terrestrial planet, is going to be a much more complicated process. I can't wait to see this core sample with my own eyes.” 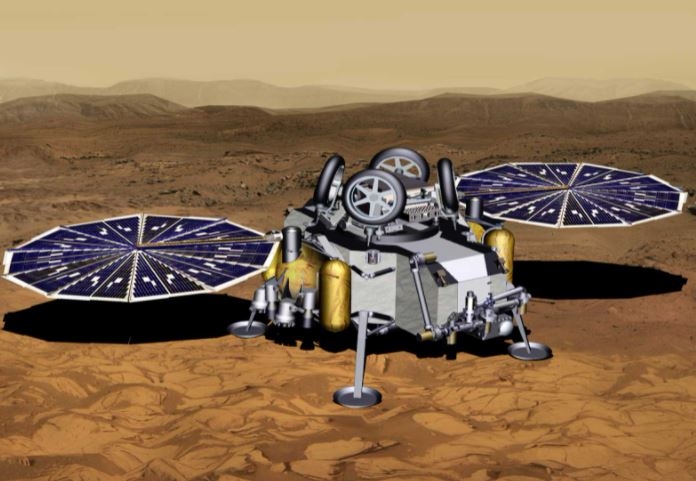 This illustration (artist’s concept) of a Mars sample return mission's lander concept shows a spacecraft after touchdown on the Red Planet. With its solar panels fully deployed, the spacecraft is ready to begin surface operations. Credit: NASA/JPL-Caltech