Solvents have long been indispensable to a broad range of major industries.

The abilities of these chemical compounds to dissolve or extract materials and substances make them invaluable in maintaining and operating manufacturing systems and machinery.

Various kinds of solvents — mostly organic liquids — are also often the most effective options for cleaning and degreasing tools and equipment, as well as for enhancing the performance and durability of many products.

Solvents are used extensively in the construction, engineering, printing, plastics, rubber, textile and dry-cleaning industries, as well as in pharmaceutical and paint manufacturing.

But for all of their advantages, the longtime widespread use of some solvents has had a serious drawback: They are among the most common and troublesome environmental contaminants in soils and groundwater.

Chlorinated solvents are especially problematic, says Anca Delgado, an assistant professor of environmental engineering in the Ira A. Fulton Schools of Engineering at Arizona State University and researcher in ASU’s Biodesign Swette Center for Environmental Biotechnology.

“For many decades they’ve been used very extensively, and during much of that time there has been a lack of regulation,” Delgado said. “So these solvents were simply disposed of in the ground, poured down drains or accidentally leaked from storage systems.”

Despite the environmental safeguards used today, many older industrial and agricultural sites remain where these solvents have seeped deep into soils, sediments and groundwater reservoirs. 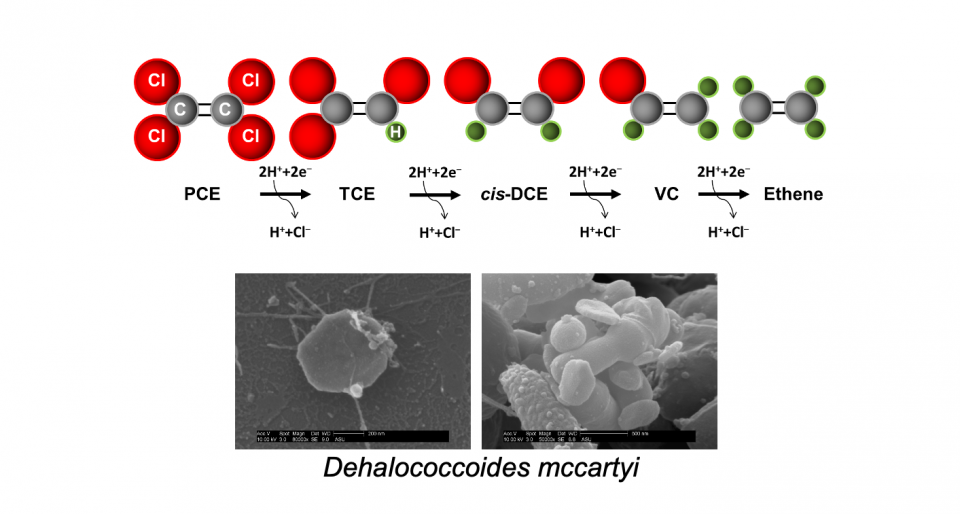 The challenges involved in remediating sites contaminated by solvents such as perchloroethylene and trichloroethylene — chlorinated compounds used extensively in the past, especially in dry-cleaning operations and metal degreasing processes — is the topic of  a paper Delgado and members of her lab team recently published in the research journal Environmental Science & Technology.

Trichloroethylene is a carcinogen — a cancer-causing substance — and many of the places containing such chlorinated solvents are groundwater aquifers that serve as sources of drinking water, or water designated for agricultural and industrial uses, Delgado says.

“There are many of these contaminated sites, many that we will still need to deal with for decades to come,” Delgado said.

Her team’s research to find more effective ways to decontaminate these areas has come from the National Science Foundation, or NSF, through ASU’s Center for Bio-mediated and Bio-inspired Geotechnics, an NSF Engineering Research Center. The center is directed by ASU Regents Professor Edward Kavazanjian, who, like Delgado, teaches in the School for Sustainable Engineering and the Built Environment, one of the seven Fulton Schools.

Delgado and the paper’s co-authors — Aide Robles, Sayalee Joshi and Srivatsan Mohana Rangan, graduate students in the civil, environmental and sustainable engineering program, along with undergraduate student Theodora Yellowman — have been working on a chlorinated solvent treatment solution that harnesses the ability of microorganisms to activate a biotechnological process called chain elongation.

Microbial chain elongation is a metabolic process through which microorganisms take small simple substrates, such as acetate and ethanol, and build them up into larger, more complex compounds while also releasing hydrogen gas during that elongation process. 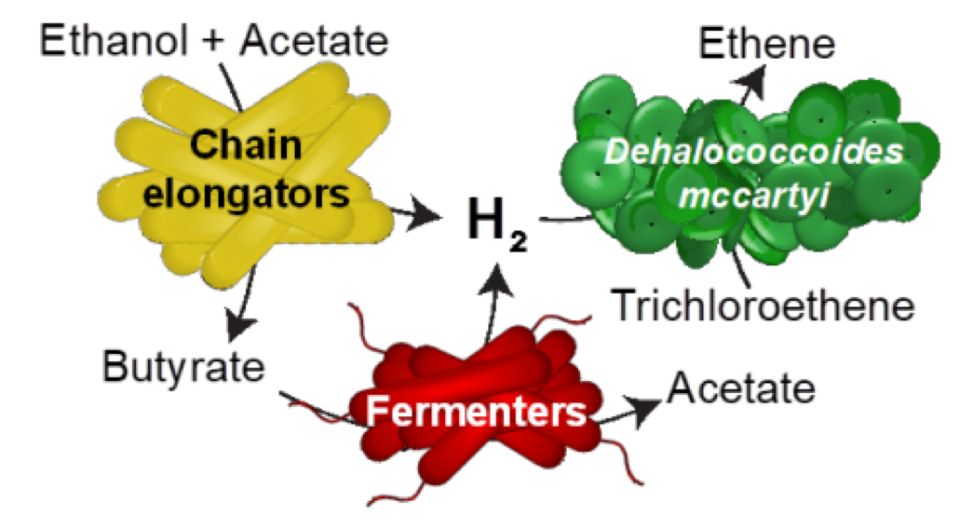 The schematic shows how chain elongating and fermenting microorganisms provide hydrogen to the bacterial strain Dehalococcoides mccartyi. The hydrogen is the energy source for a process to detoxify chlorinated solvents. The process is the focus of a new research paper in the journal Environmental Science & Technology by faculty and student researchers in the Ira A. Fulton Schools of Engineering. Graphic by Aide Robles/ASU

Hydrogen is a source of energy for another group of microorganisms called reductive dechlorinators. These are the main players in the decontamination process, removing the chlorines from the chlorinated solvents and converting them into ethene, a nontoxic product.

However, hydrogen can also be utilized by many other microbes, which creates a competition for hydrogen.

“We have been acquiring contaminated groundwater and soil materials and testing microbial chain elongation substrates that perform a reductive dechlorination process,” Delgado said. “What we are looking for is technology that will lead to complete dechlorination of a chlorinated contaminant and divert less hydrogen to unwanted microbial processes, such as the production of methane.”

Methane can be harmful because it is highly flammable, can reduce the amount of oxygen in the air and can trap heat in the atmosphere.

The team’s research paper describes ways in which naturally occurring microorganisms can be directly stimulated in the soil and groundwater, or be grown in the lab, and then applied at contaminated sites to perform bioremediation — using microorganisms to treat contaminants.

The process involves the addition of various food sources, such as vegetable oil, molasses and lactic acid, for the fermenting microorganisms that already exist in soil or groundwater. This is where microbial chain elongation comes into the picture, Delgado explains. The chain elongation process is an alternative to fermentation and may be the more effective decontaminant, depending on how hydrogen is utilized to fuel the process.

Haley & Aldrich, a nationwide environmental and geotechnical engineering consulting company, is interested in applying Delgado’s new remediation technology in the field at one or more of their project sites, says Nasser Hamdan, the Center for Bio-mediated and Bio-inspired Geotechnics' industrial collaboration and innovation director. Haley & Aldrich, one of the center's major industry collaborators, is funding the center’s study to prepare for a field deployment test of the technology.

“(The center's) work on microbial chain elongation can decrease the time and cost associated with the cleanup of chlorinated solvent compounds in groundwater,” Bennett said. “Given the widespread groundwater contamination and importance of groundwater as a resource for society, the value of this development cannot be overstated.”

At Haley & Aldrich, he said, “We’re always striving to deliver the most valuable solutions to our clients’ greatest problems, often by leveraging technology developed in academia with innovative thinking. Our collaboration with (the center) may enable us to offer microbial chain elongation as a solution that will finalize the groundwater cleanup at one of our clients’ most challenging remediation sites.”

Delgado’s project “embodies ASU’s and the NSF Engineering Research Center program’s symbiotic goals of use-inspired research through collaborations of industry and academia,” said Kavazanjian, director of the Center for Bio-mediated and Bio-inspired Geotechnics.

Solvents are in the water and soil at many of the locations on the U.S. Environmental Protection Agency list of contaminated Superfund sites that pose threats to human and environmental health.

“There is a need for more progress in overcoming the technological challenges to doing contamination cleanup better and faster,” Delgado said. “I think the work we are doing at ASU has the potential to contribute to the breakthroughs that enable effective chlorinated solvent cleanup and reclamation of  our groundwater sources.”