Connecting the dots between redlining and heat resilience in Phoenix

Juneteenth — now a federal holiday — commemorates the end of slavery in America. But the historical events that followed, ushering in an era of Jim Crow laws and redlining across the country, impacted our cities and towns substantially and are reflected in our present-day experiences in urban spaces.

In many cities, people can tell when they have entered a low-income neighborhood. They can tell by the quality of the roads, the lack of grocery stores and, particularly in redlined neighborhoods, a higher percentage of people of color.

Here in the Phoenix metro area, such neighborhoods also are marked by a lack of trees, disinvestment in infrastructure and deadly health consequences.

With Arizona experiencing its hottest summer on record last year, identifying heat-mitigation strategies and solutions is already a complex issue, and the lasting effects of racially based redlining implemented throughout the 20th century only add to its complexity.

Redlining was the practice of denying loans to people of color and low-income individuals based on the financial risk of the area where they chose to live. Essentially, this process aided in the active separation of races during segregation.

On the Mapping Inequality: Redlining in New Deal America website, a map of Phoenix shows how the city’s neighborhoods were categorized by lenders in 1940. One of the “hazardous” areas it highlights is section D4, described at the time as being“very ragged, occupied by Mexicans, Negroes and the low class of white people. There is no sale for property herein.” In another section, the original mapmakers wrote “in the Negro section are some very good homes, considering their occupancy by colored people.” 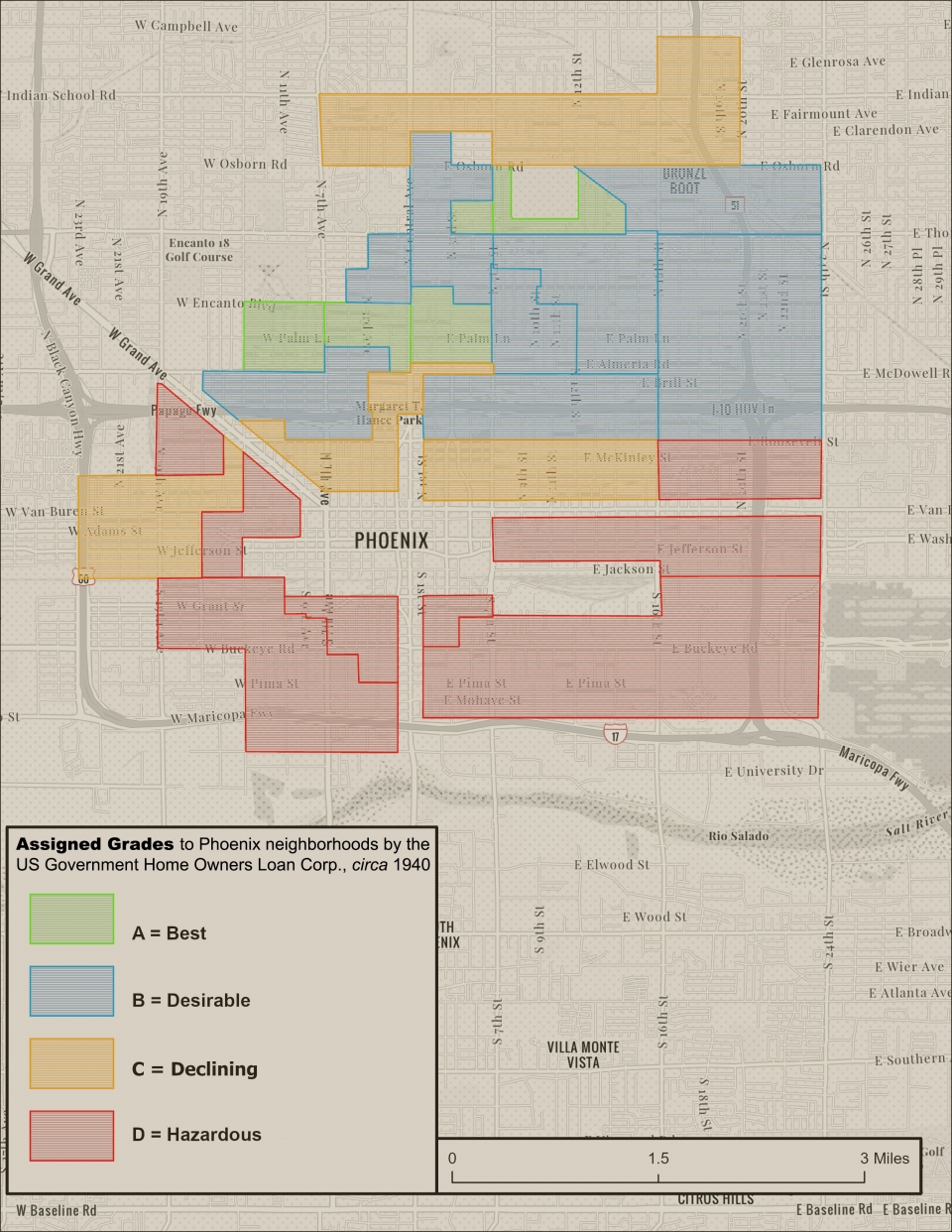 Created by ASU’s Knowledge Exchange for Resilience (KER), this map overlays historically redlined areas onto modern-day Phoenix. It is based on a historical map of redlining in the city made available by the University of Richmond’s Digital Scholarship Lab.

While redlining is no longer legal, the legacy of this practice in Phoenix and across the country makes finding thermal justice solutions a priority.

ASU researchers are using spatial data and partnerships to work toward heat equity for all people.

“When you have hundreds of deaths every year, that’s like a (Hurricane) Katrina every year,” Solis said. “It is so slow-moving, and chronic, and spread out all over the city; you see the storm coming, and you know exactly where it’s going to hit.”

The Utility Assistance Network led by Wildfire, an advocacy group aimed at ending poverty, asked KER to examine vulnerable communities in order to better offer services and ultimately save lives.

Solis and her team began by mapping and formulating a rich dataset. By linking heat-associated deaths, state programs, cooling centers, utility bills and more, Solis discovered that people who live in mobile homes were disproportionately affected by extreme heat.

“When you map it, you can see it clearly,” Solis said. “... The type of housing matters. Are they living in a single-family home, or are they living in a mobile home? An older mobile home? You can have the same income, but your housing structure and the site where it is plays a big factor in determining your exposure to that heat.”

Additionally, people who work in a job that exposes them to the outdoors, such as construction and landscaping, are often excessively exposed to heat. People experiencing homelessness are also especially vulnerable.

“There was a spike in outdoor heat deaths last year,” Solis said. “And if you look at the demographics, Black men aged 50–60 are extremely overrepresented among people experiencing homelessness. There are also lower-income immigrant communities or people who don’t speak English as a first language who live in housing that may not be heat resilient. Native Americans here in Arizona are also very overrepresented in terms of health outcomes for heat.”

Many of the places where minority and economically disadvantaged communities reside in Phoenix coincide with historically redlined neighborhoods, where the legacy of disinvestment continues. This coincides with higher land surface temperatures given housing and infrastructure differences. 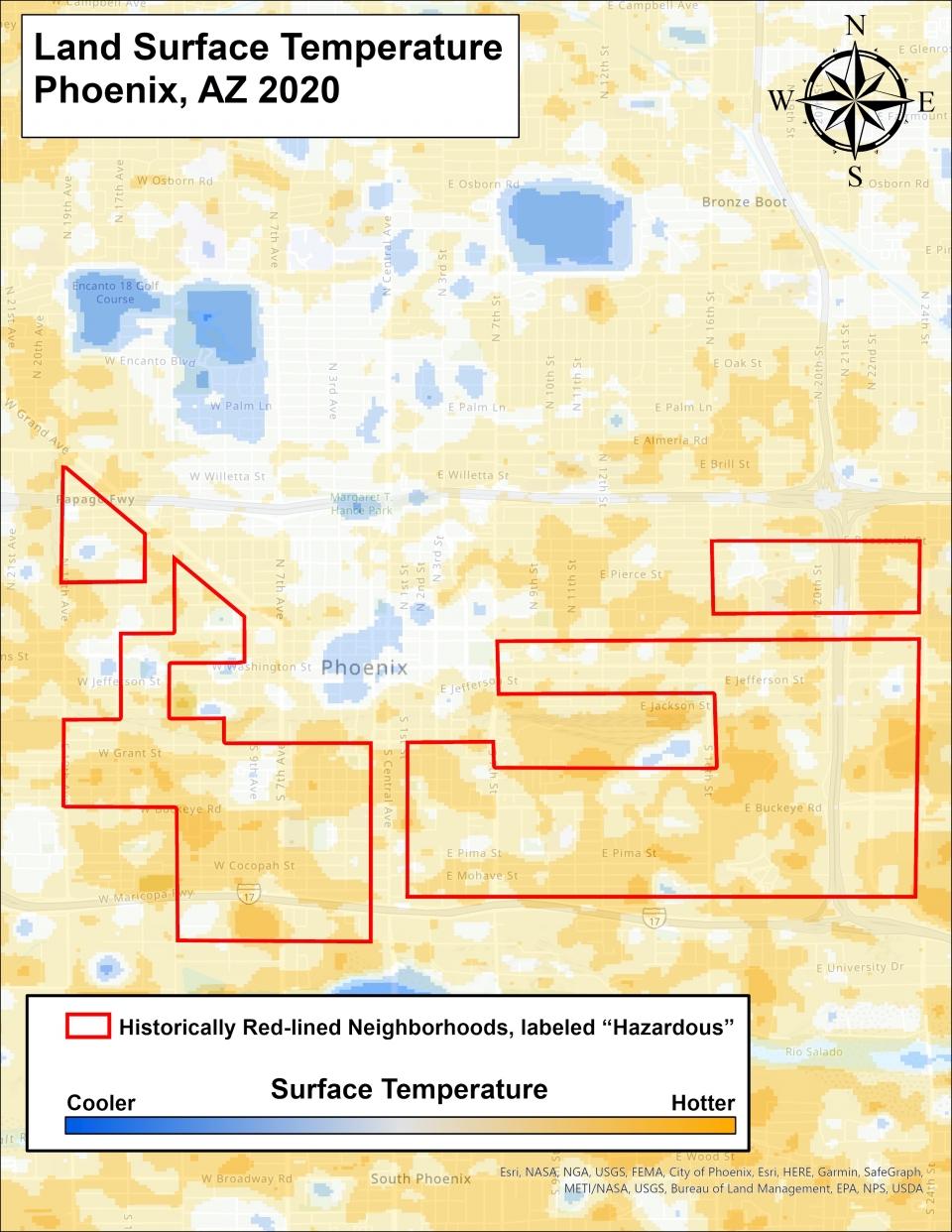 In Phoenix, areas that were historically redlined today experience some of the highest land surface temperatures in the city. Map courtesy of KER

Exposure to higher temperatures in the built environment can lead to greater risk for heat-related illness.

According to Melissa Guardaro, assistant research professor with KER and co-leader of the Arizona Heat Preparedness and Resilience Workgroup (AHPRW), evidence of the correlation between socioeconomically disadvantaged communities and heat-related deaths in the Phoenix area is evident through the historical side effects of redlining.

“Redlining has created a historical legacy of underspending in the area,” Guardaro said. “You can just see it. … You can just drive through the different neighborhoods and see the difference in tree plantings and public spaces for cooling. It is starkly apparent.” 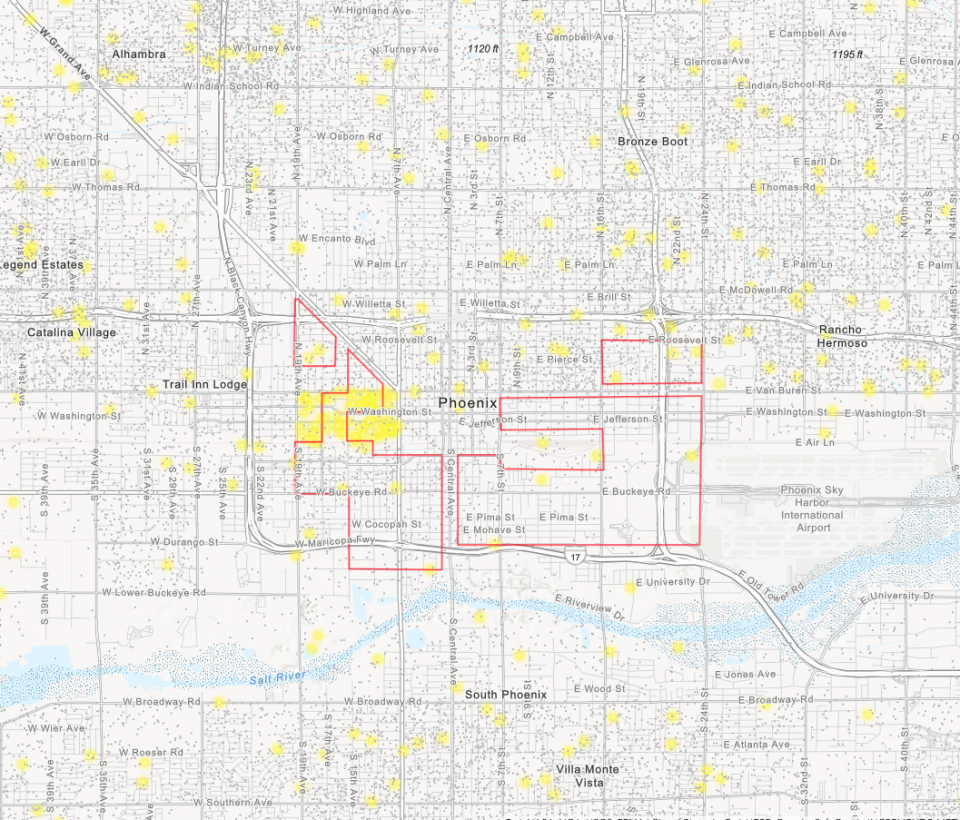 Present-day heat-related illnesses (yellow) among the population (gray) living now in the historically redlined neighborhoods of Phoenix (red). Much of the area around Buckeye Road has since been depopulated given the proximity of Phoenix Sky Harbor International Airport to the east. Data from Maricopa County Department of Public Health, various years.

The AHPRW sprung into existence when de facto cooling centers and public spaces like libraries, movie theaters and community centers abruptly closed during COVID-19. The group worked to try to open more cooling centers in neighborhoods that needed it the most.

Through the use of an optimization map, the team connects factors such as age, socioeconomic status, percent of greenness in the area and past heat mortality and morbidity statistics to figure out where the most vulnerable people are. This process allows groups such as the Arizona Faith Network to fill in the gaps to ensure cooling centers and hydration stations are available.

Though this work is essential, Guardaro says public officials also have a role to play.

“I think that local officials should use a data-driven approach to where they prioritize cooling, spending and heat-mitigation adaptation programs,” Guardaro said. “And if you’re trying to decrease deaths and heat mortality and morbidity, you need to disproportionately spend in those communities that have a lesser tree canopy, that rely on public transportation and where children who are walking to school are not taking the bus or being transported.”

There are intersecting systems contributing to the lack of thermal justice and hope for future reform.

“You’ve got the housing system, the energy system, infrastructure, trees and then this historical legacy of redlining,” Solis said. “Not only do you have to solve the present problem, but you have to somehow overcome disinvestment, and in some cases the active lack of investment historically.”

Still, there is cause to hope.

“Phoenix is a case of how people are thriving in a very hot city,” Guardaro said. “We need to be really hopeful that we can beat this and that we can learn to thrive with urban heat and at the same time try to lower the number of deaths.”

As the heat season resumes, recognizing where history meets the present can provide a map for where to invest in solutions like infrastructure and housing improvements. By addressing current needs in urban spaces for the most vulnerable, a community can increase the potential for recovering from some of the long-lasting effects of racially based redlining.