Dedication to education was cornerstone of engineering professor’s career

Friends, colleagues and family members describe Daniel Jankowski as having been one of those unforgettable figures who, as the expression goes, “had quite a reputation.”

But in Jankowski’s case, they emphasize the statement is not meant to be derogatory. It instead conveys respect and admiration.

If you were a student of the longtime Arizona State University professor of mechanical engineering and he was tough on you, it was because he wanted you to take your education seriously.

If Jankowski was relentlessly demanding, it was his way of trying to drill into students that good engineers are those who are meticulous to an extreme.

If he worked you tirelessly to become a good student, you could be sure he was working harder to be a good teacher.

“He was the guy who was the first one at work every day and the last one to leave, and then he graded papers at night at home and went into the office most Saturdays,” said Jankowski’s son, David.

“He could be intimidating, but that is how he trained you how to work under pressure, which is what a lot of engineers must do,” said former student Eddie Cooper.

Jankowski sparked Cooper’s interest in fluid mechanics — Jankowski’s primary area of research — and got him access to lab space and equipment as an undergraduate. He also convinced Cooper to earn a master’s degree.

Cooper says what he learned from Jankowski is “the source of much of my success as an engineer,” and the success of B33 Consulting, the company he and his wife, Anne Cooper, an ASU structural engineering graduate, have owned and operated for almost 20 years.

Jankowski, a U.S. Army veteran who died at age 84 in November 2020, joined the ASU faculty in 1964 and stayed for the next 40 years. Along with teaching and research, his roles included stints as an associate dean of academic affairs, an interim dean and a coordinator of the university’s academic accreditation process. The Jankowski Legacy Award, established 20 years ago, is now one of the highest honors for faculty members in ASU’s Ira A. Fulton Schools of Engineering, recognizing those who have followed in Jankowski’s footsteps by making impactful contributions to research, teaching and public service that help fulfill the schools’ mission.

Fulton Schools Professor Paul Westerhoff, the Fulton Chair of Environmental Engineering, was recently named the 2021 winner of the award.

Fulton Schools Professor Emeritus Joseph Palais, who also joined the faculty in 1964 and was the first recipient of the Jankowski Award, recalls the large crowd of colleagues and former students who came to Jankowski’s retirement party, including many who had traveled long distances for the occasion.

“The many nice things they said about him, about his leadership and expertise, showed how highly they thought of him,” Palais said. 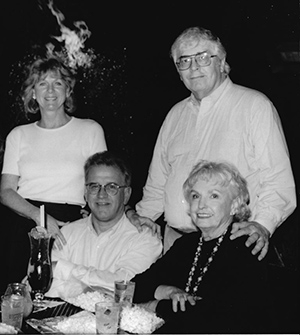 Among those who held Jankowski in high esteem — both professionally and personally — is Paul Neitzel, now a professor emeritus at Georgia Tech. In Neitzel’s 11 years at ASU, he and Jankowski became frequent research collaborators and also best friends, which they remained throughout the 30 years since Neitzel left ASU.

Neitzel says their work together resulted in better understanding of the fundamental aspects of fluid flow, including discoveries about a specific flow instability that NASA was especially interested in because the findings had ramifications for materials processing in microgravity environments.

“Dan was so serious about his teaching, but just as careful about the details” in the laboratory, Neitzel recalls.

Jankowski excelled both as a theoretician and an experimentalist, making contributions to progress in his field that Neitzel is certain helped ASU’s engineering program earn the high recognition that has elevated its stature in the decades since.

Jankowski’s zeal for the pursuit of excellence extended beyond his own work.

“He pushed everyone to maintain a focus on the quality of our work and the quality of the service we were here to provide. He was super devoted to ASU,” said Professor Sandra Houston, another Jankowski Award winner.

Houston recounts Jankowski’s support for her during the 10 years she was the chair of the civil engineering and environmental engineering program, the first woman to hold the position.

“There were some challenging times for me,” she said. “But he provided me a lot of wise counsel. He really meant a lot to me.”

Professor Emeritus Randy Truman says he has emulated Jankowski more than anyone in his almost four decades teaching mechanical engineering at the University of New Mexico.

“Dan was a very serious and stern professor. It took a while to get to know him,” he said. “But when I did, I was very much in awe of him as a teacher. He was really my role model.”

Jankowski expected students to work hard and he didn’t accept any excuses, Truman remembers. But the professor held himself to the same standard.

“I learned that he never stopped working on improving his lectures and interactions with students,” he said. “It really impressed me.”

“My dad loved being a professor. It was not easy to get an ‘A’ from him,” he said. “But he wanted students to do more than learn the minimum needed to pass a course. He wanted them to think and act like real engineers.”

David credits his father for “really instilling a passion in me” by setting an example of the dedication he needed to earn a doctoral degree, become a university professor and then move on to a successful career of more than 20 years in management information systems.

He is not alone in appreciating Daniel Jankowski’s role in preparing him for his life’s work.

“When he passed away, I read and heard comments from a lot of people who have achieved significant things in academia and other professions,” David said. “They all said how grateful they are for things he taught them that have been relevant and meaningful in their lives.”