The Giant Magellan Telescope has announced fabrication of the sixth of seven of the world’s largest monolithic telescope mirrors. These mirrors will allow astronomers to see farther into the universe with more detail than any other optical telescope before.

The sixth 8.4-meter (27.5-foot) mirror — about two stories high when standing on edge — is being fabricated at the University of Arizona’s Richard F. Caris Mirror Lab and will take nearly four years to complete. The mirror casting is considered a marvel of modern engineering and is usually celebrated with a large in-person event with attendees from all over the world. Due to the coronavirus pandemic, work on the sixth mirror began behind closed doors to protect the health of the 10-person mirror-casting team at the lab.

“This is a major milestone towards completing some of the most critical parts of GMT — the giant mirror casting,” said Rogier Windhorst, Regents and Foundation Professor and co-director of the ASU Cosmology Initiative. “We will now have only one more mirror to go, and then we can focus on completing the construction of this state-of-the-art observatory that will play a leading role in ground-based astronomy this century. ASU is very proud to be part of GMT. ''

When the Giant Magellan Telescope (GMT) is fully completed, it will be one of the next generation of giant ground-based telescopes promising to revolutionize our view and understanding of the universe. It will produce images 10 times sharper than the Hubble Space Telescope and give us a closer look at the first stars and galaxies to ever exist. It will also help us understand planets outside of our own solar system — including ones that could support life.

The GMT project is the work of a distinguished international consortium of 12 leading universities and science institutions, including ASU.

“The fabrication of this giant mirror means we are one step closer to the exciting discoveries that will be forthcoming from the GMT,” said Meenakshi Wadhwa, director of ASU’s School of Earth and Space Exploration. “Astronomers in the School of Earth and Space Exploration here at ASU are particularly keen to study light from the first stars and galaxies, and to explore exoplanets and their characteristics.”

The process of casting the giant mirror involves melting nearly 20 tons (38,490 pounds) of high-purity, low-expansion, borosilicate glass (called E6 glass) into the world’s only spinning furnace designed to cast giant mirrors for telescopes. At the peak of the melting process, the furnace spins at five revolutions per minute, heating the glass to 1,165 degrees Celsius (2,129 F) for approximately five hours until it liquefies into the mold. The peak temperature event is called “high fire” and will occur on March 6, 2021.

GMT Mirror 5 in preparation for casting. This timelapse shows several stages of loading the glass into the mold.

The mirror then enters a one-month annealing process where the glass is cooled while the furnace spins at a slower rate in order to remove internal stresses and toughen the glass. It takes another 1.5 months to cool to room temperature. This “spin cast” process gives the mirror surface its special parabolic shape. Once cooled, the mirror will be polished for two years before reaching an optical surface precision of less than one-thousandth of the width of a human hair or five times smaller than a single coronavirus particle.

With the first two giant mirrors completed and in storage in Tucson, Arizona, the sixth mirror joins three others in various stages of production at the mirror lab. The third mirror’s front surface polishing has achieved 70-nanometer accuracy and is less than one year from completion. The fourth mirror has completed rear surface polishing, and load spreaders are being attached to allow the mirror to be manipulated during operation. The fifth mirror was cast in November 2017, and the seventh mirror is expected to be cast in 2023. In addition, an eighth spare mirror is planned to be made that can be swapped in when another mirror requires maintenance. 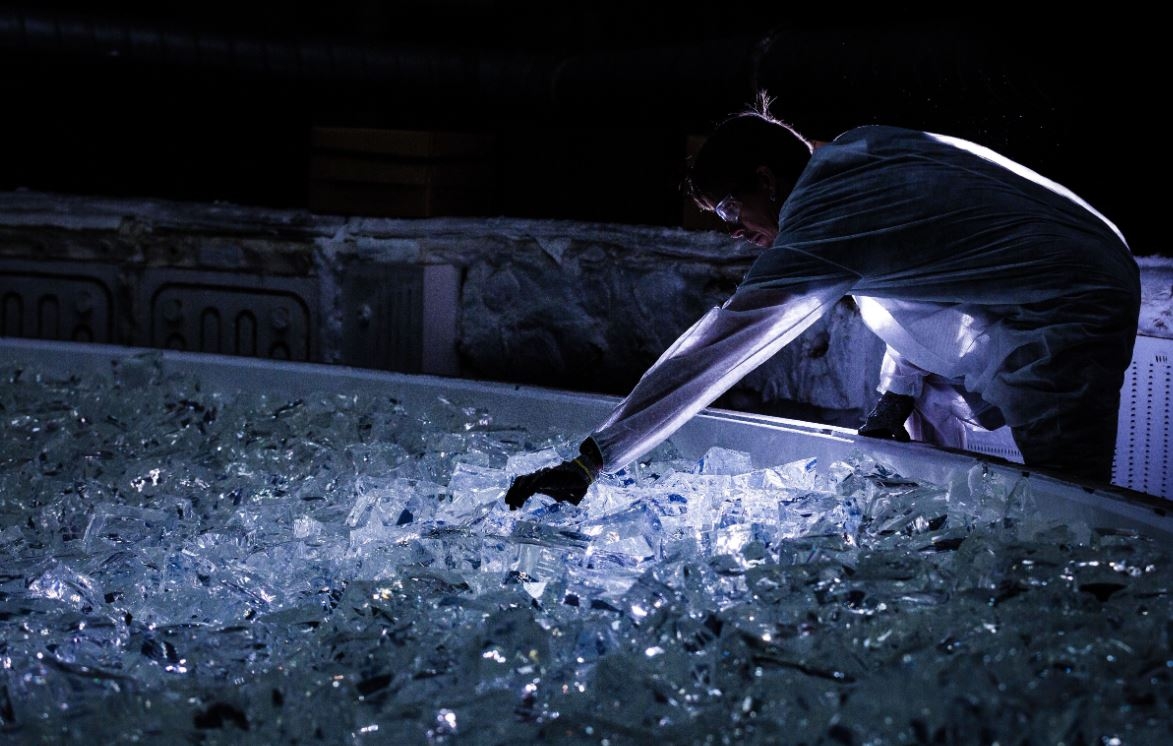 In the late 2020s, the giant mirrors will be transported more than 8,100 kilometers (5,000 miles) to the GMT’s future home in the Chilean Atacama Desert at Las Campanas Observatory, more than 2,500 meters (8,200 feet) above sea level. The site is known for being one of the best astronomical sites on the planet, with its clear skies, low light pollution and stable airflow producing exceptionally sharp images. Additionally, the site’s Southern Hemisphere location gives the extremely large telescope access to the center of the Milky Way, which is of interest for many reasons, including the fact that it is the home to the nearest supermassive black hole, as well as many of the most interesting nearby galaxies. The Southern Hemisphere is also home to some of the most powerful observatories working at other wavelengths, making it the ideal location for synergistic scientific observations.

Once the GMT becomes fully operational, its seven-mirror array will have a total light collecting area of 368 square meters (3,961 square feet) — enough to see the torch engraved on a dime from nearly 160 kilometers (100 miles) away. Such viewing power is 10 times greater than the famed Hubble Space Telescope and four times greater than the highly anticipated James Webb Space Telescope, expected to launch in late 2021. The mirrors are also a crucial part of the optical design that allows the GMT to have the widest field of view of any extremely large telescope (ELT) in the 30-meter class.

The unique optical design will make the Giant Magellan Telescope the most optically efficient ELT when it comes to making use of every photon of light that the mirrors collect — only two reflections are required to direct light to the wide-field instruments and only three reflections to provide light to the instruments that use small fields of view and the highest possible spatial resolutions.

“This unprecedented combination of light-gathering power, efficiency and image resolution will enable us to make new discoveries across all fields of astronomy, particularly fields that require the highest spatial and spectral resolutions, like the search for other Earths,” Rebecca Bernstein, chief scientist of the Giant Magellan Telescope, said in a recent GMT press release. “We will have unique capabilities for studying planets at high resolution, which is the key to understanding if a planet has a rocky composition like our Earth, if it contains liquid water and if its atmosphere contains the right combination of molecules to signal the presence of life.”

This release was written by Ryan Kallabis for GMTO with contributions from Karin Valentine of the ASU School of Earth and Space Exploration.