Etching an impact on ASU geography

When Barbara Trapido-Lurie was hired by Arizona State University as a cartographer in fall 1987, the geography department looked different than it does today.

There were less than half of today’s students on campus. The building in which the department is now housed did not yet exist. Personal computers were a rarity, and the creation of all scientific graphics and maps — her specialty — were still meticulously drawn by hand.

“It was a different time. We had no internet, no PDFs, no computers. It was all about creating things that would work visually in printed form,” Trapido-Lurie recalled in a recent Zoom interview from her home. “I had different types of pens, chalks, really artists’ tools, wax crayons; there was a little tool for shading, you shaded things by rubbing the graphite of the pencil.”

Trapido-Lurie this month retired from ASU after more than three decades. In her tenure, she has created thousands of maps used by hundreds of thousands of students, teachers and researchers from around the globe. But her influence on ASU’s geography department — now the School of Geographical Sciences and Urban Planning — moves far beyond the creation of specialized education tools, but lies in the community she’s nurtured, the responsibilities she’s taken on, and the impact she’s had on what the school has become today.

“Ultimately, her impact on the school has been far greater than any other faculty member I can recall,” said Ron Dorn, professor in the School of Geographical Sciences and Urban Planning and a colleague of Trapido-Lurie’s for more than 30 years.

“Barbara grew and evolved her professional activities in parallel with the ebbs and flows of the School of Geographical Sciences and Urban Planning and ASU as an institution. ... If there was an ‘MVP’ award at ASU, she would have won the award annually for the last two decades.”

Growing with the school

Hired as the department’s cartographer at a time when the geography department was going through many changes, Trapido-Lurie focused on supporting faculty by creating maps, graphics and slides used in publications and presentations. But as the department inevitability grew, so did her role and her reach.

When a professor took leave she offered to teach his cartography class in his place, and soon she became the lead instructor for the course. When an opportunity to teach an upper-division geography class opened up, she stepped into the role. When there was a gap in staffing to manage the department’s website, she took the lead. And when two colleagues were retiring, she sought to learn how to write news stories so their legacies wouldn’t be forgotten. Trapido-Lurie, again and again, took on new responsibilities on top of her ever-expanding cartography duties for the betterment of the school.

“Barbara changes the face of geography in fundamental ways,” said Elizabeth Wentz, vice provost and dean of the Graduate College and a professor in the School of Geographical Sciences and Urban Planning. “She always had a high standard and worked tirelessly to support students and faculty. She was always adapting, too.”

Her contributions to the School of Geographical Sciences and Urban Planning are unending.

Trapido-Lurie created thousands of maps and other illustrations for academic research, instructed hundreds of students in courses of cartography, geographic information systems (GIS) and quantitative methods. She, for a period, managed the department's website, spearheaded all communications and marketing and served as the editor of the department's weekly e-newsletter, annual alumni newsletter and “The Arizona State Geographer," an annual printed newsletter to the Arizona geography community.

Trapido-Lurie was also the face of the School of Geographical Sciences and Urban Planning at ASU community-facing events. For years, she organized the school’s presence at both homecoming and at ASU’s Open Door, introducing teenagers, children, parents, teachers and alumni to the work and projects of the school's students and faculty.

“As the needs in the school changed, she made herself available for new roles,” said Wentz, who also served as the director of the school from 2013–15, and has been a colleague of Trapido-Lurie for more than two decades. “We are a better school because of her.” 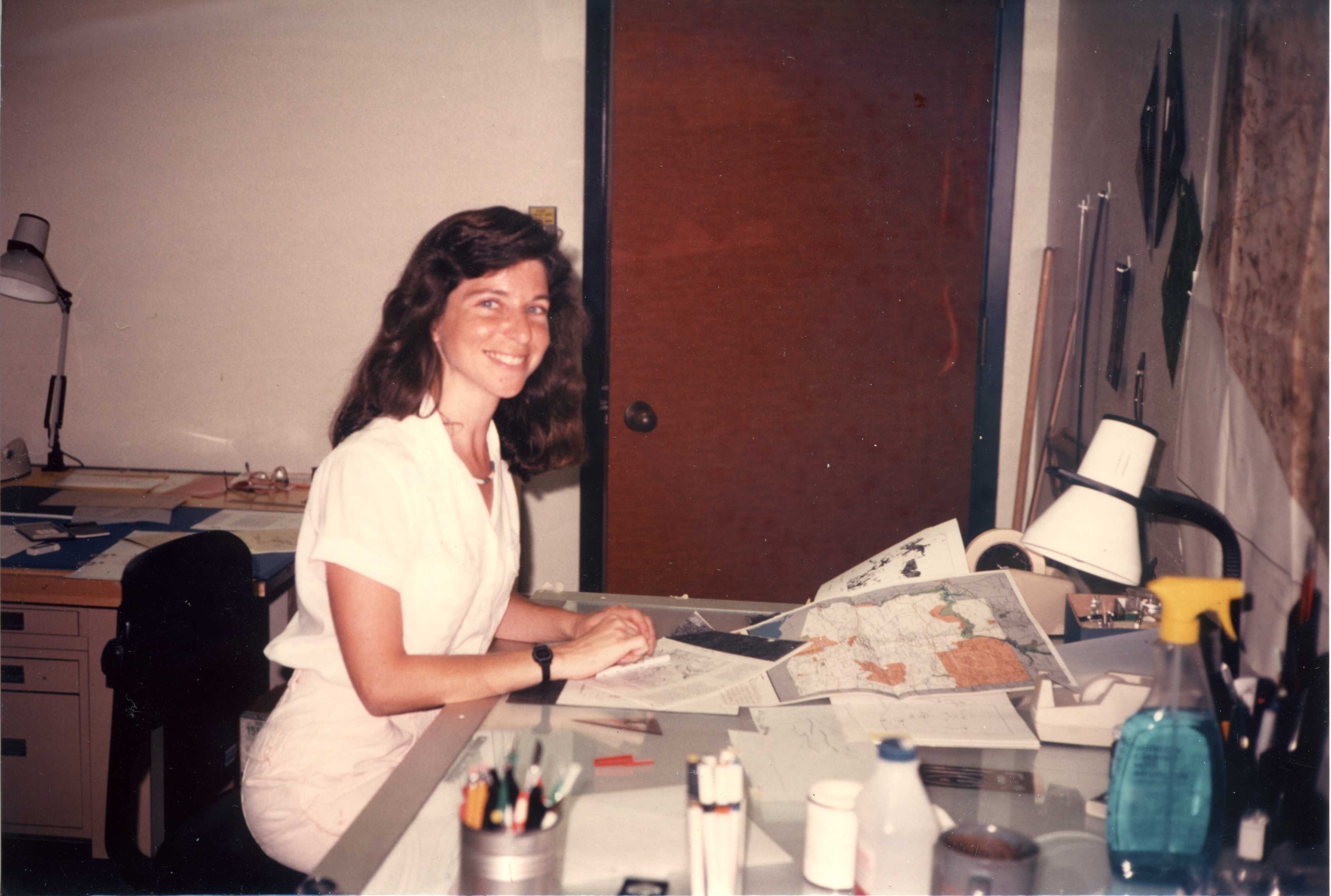 Introducing youth to the world of geography

The design of a map can do many different things, and the decisions a cartographer makes can control the story. It can transmit propaganda, provide insight or drive motivation to learn more. Trapido-Lurie always hoped her work would inspire.

Trapido-Lurie designed what is perhaps the largest map of Arizona in existence. The giant 17-by-22-foot heavy-vinyl floor map easily carpets an entire classroom and is used by dozens of schools and hundreds of elementary students each year. Kids play games on the map to learn about things like longitude and latitude and how to use a legend.

Trapido-Lurie not only used her creativity and cartography skills in research academic settings but also as a way to introduce youth to the world of geography. For 20 years, she’s designed maps for ASU’s Arizona Geographic Alliance, a K–12 outreach program to promote geographic education in Arizona, helping inspire and educate students about the world around them.

“Barbara has achieved something that has impacted the field of geography far more than any tenure-track faculty member,” said Dorn, who also is a former co-coordinator of the Arizona Geographic Alliance. He pointed to the organization’s website, which houses more than 250 maps created by Trapido-Lurie and her students, and hundreds of lesson plans in which the maps are used. “This website has done far more to develop and promote geography than any other project to come out of our school.

“Barbara's map site has been accessed by hundreds of thousands of geography teachers across Earth to the benefit of us all in having a more geographically literate society.”

For all the work she’s done, Trapido-Lurie says that helping students find their passions through internships and professional connections has always been the most rewarding. It’s a reflection, she says, of her own circuitous path from being a student to her career at ASU.

Trapido-Lurie was born and raised in Honolulu, Hawaii. Following college graduation with a fine art degree, she worked a variety of part-time jobs, unsure about her future career path, until she was introduced to a medical illustrator at the University of Hawaii, Manoa. That person then introduced her to a scientific illustrator, who became a valued mentor and introduced her to the field of cartography.

“She mentored myself and a friend for at least six months, maybe a year, giving us a series of assignments, introducing us to techniques of scientific illustration and explaining the whole print production process,” Trapido-Lurie recalled of her mentor. “But then, she had this tip. She said that a course in cartography really helped her understand the whole printing process. … That was why I took that first course in cartography.”

How others have impacted her own career is not lost upon her. Two decades later, at ASU's School of Geographical Sciences and Urban Planning, Trapido-Lurie became a leading force behind student internships and career development. She organized and developed the geography and urban planning internship programs. She helped create the first internship class and taught it for 23 years. And she worked tirelessly to build connections with the community and develop strategies to support students in finding ways to apply their education outside of the classroom.

Trapido-Lurie organized career expos, job fairs and professional panels focused on networking. The last expo in 2019 attracted nearly 100 professionals and more than 300 students. She also, alongside other colleagues, developed a website called Career Navigator that houses videos in which professionals in geography, GIS and urban planning describe their work and offer advice to students.

“Barbara does so much and was never too busy to help when needed,” said Heather Moll, an alumna of the School of Geographical Sciences and Urban Planning and co-coordinator of the Arizona Geographic Alliance. “Nothing to her was too small or large of a project.”

Trapido-Lurie also was a valued mentor to students and inspired many in the fields of GIS and cartography.

“I learned so much from her class and from subsequent classes with her,” said Becky Eden, a former student of Trapido-Lurie who now uses cartography and GIS in her job with the state of Arizona. “Barbara noticed (my work), and she said I should apply for a job as a cartographer with the Arizona Geographic Alliance. I applied, got the job, and worked with her and the rest of her team for 10 years creating maps part-time for K–12 education. It was one of my favorite jobs.”

Trapido-Lurie looks with empathy and admiration as students navigate their own journeys.

“It’s so rewarding to see students find their passions in a school environment, and then connect with careers that allow them to make a meaningful impact,” Trapido-Lurie said with a smile. “I’ve been so privileged to see this transition, through my work with students in finding internships, hearing about their experiences as an instructor of the internship classes, and then in many cases, seeing their careers develop over the years.”

Following retirement, Trapido-Lurie says she looks forward to traveling with her husband more and contributing in new ways to the community.

“I feel like I'm kind of exploring,” Trapido-Lurie said of her volunteer work locally. She’s already helped the McDowell Sonoran Conservancy develop maps for an annual education week, and was a COVID-19 vaccine site volunteer. “But I definitely want to use my additional time to engage with the place I've lived for the last 34 years.”

In her career at ASU, Trapido-Lurie has etched more than maps but made her mark on a school that has benefited from her dedication to move it forward. She always generously and humbly found ways to do more and prioritize others first.

“I have to say, I will miss interacting with the students, our amazing staff and our faculty, but I'm exploring ways to keep doing that, so the book isn't necessarily closed,” she said.

“I have so much appreciation for our very, very talented team of staff in our school. Every single person makes such a huge contribution to impact so many people at the university. Oh, it's just awesome.”