Launching an astronaut from one planet to land successfully on another could be the future of detecting cognitive and functional decline in older adults.

Not launches initiated by NASA mission control, but by ordinary people playing a simple computer game developed by Andrew Hooyman, a postdoctoral research scholar in the Ira A. Fulton Schools of Engineering at Arizona State University.

This work, conducted in collaboration with researchers at ASU, the University of Utah and the Translational Genomics Research Institute, aligns with new National Institutes of Health initiatives focused on enabling earlier and more accurate detection of Alzheimer’s disease. Understanding how current mental and physical abilities forecast a person’s future abilities is one component of this effort.

“We need to be able to identify individuals who are going to experience cognitive or functional decline, and then provide guidance or intervention early on,” Hooyman says. “We’re trying to bring this research into the 21st century.”

Hooyman is in the early stages of an innovative project to achieve this goal using an online research platform. Joining forces with an influential team of collaborators has been key to Hooyman’s selection to receive the competitive NIH F32 Ruth L. Kirschstein Postdoctoral Individual National Research Service Award from the National Institute on Aging, one of the National Institutes of Health.

“Andrew’s career development plan is overseen by a very supportive and unique mentoring team across multiple disciplines,” says Sydney Schaefer, an assistant professor of biomedical engineering in the Fulton Schools and Hooyman’s mentor. “He curated a three-year career development plan that provides new training opportunities in big data and statistics that have direct clinical relevance for Alzheimer’s disease.”

For Hooyman, the recognition by the NIH has validated his work and his decision to pursue a career as a professor.

“This award promotes the research in a way that makes it identifiable as something that is of interest and something to keep an eye on in the future,” Hooyman says. “It’s hugely important, it’s competitive and I’m very happy and feel fortunate to be where I am today because of it.”

An innovative way to assess learning 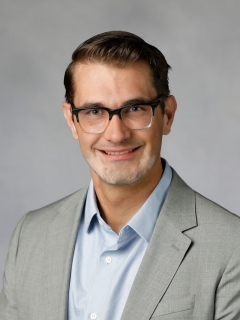 Hooyman studies how people learn motor skills, and he brings a unique combination of expertise in neuroscience, data science and computer programming to his research.

Earlier in his education as a biokinesiology and movement neuroscience doctoral student at the University of Southern California, Hooyman developed a game as a new way to study how people learn motor skills.

In “Help Super G Explore the Solar System,” players use arrow keys on the keyboard to launch an astronaut called Super G from one planet to another. The astronaut only has so much fuel, so time is limited to get to the next planet. If players fail before reaching their goal, they start over. If they succeed, the planet puts on a fireworks show.

“We don’t tell people the best way to play; we want to see how they learn that,” Hooyman says.

His work replicated the results of a 20-year-old study that showed approximately 30% of participants were categorized as non-learners or very slow learners in a similarly simple motor skill task. He hypothesized that if he used the same game with older adults, it could present a strong indicator of whether a person will experience cognitive or functional decline a year or more later.

A new, online frontier of research

Hooyman’s doctoral research caught Schaefer’s attention at a conference. In her work, Schaefer looks at how physical function while learning a motor skill predicts cognitive or functional decline in older adults. With their matched interests, Hooyman joined Schaefer’s lab as a postdoctoral research scholar in 2019.

A conversation between Hooyman and Schaefer during a car ride in late 2019 set Hooyman on a path to take his research to a new frontier: online.

“I remember we were driving, and I told (Schaefer), ‘I would love to run a virtual lab,’” he recalls, adding that he believes he would have much more success if he were able to do all of his research online — and make it more accessible and get more people interested in research.

“That support has meant a lot in terms of being able to take that idea in that car ride and put it into a grant and formulate it in a way that the National Institute on Aging felt was meritorious,” Hooyman says.

Online-based assessments are something few other research groups are doing, but Hooyman and Schaefer are leading the way with a team of influential researchers in the field of cognition and aging.

Matt Huentelman, a professor of neurogenomics with the Translational Genomics Research Institute, is also the director of MindCrowd, an online data-collecting research project. MindCrowd looks at how lifestyle, demographics, genetics and cognitive factors are predictive of different aging variables, including dementia. Huentelman provided Hooyman his first chance to realize his dream of having an online lab.

“I didn’t even know at the time if I could do that because before that it was all done in a lab,” says Hooyman. "Whether it was foolishly or recklessly or bravely, I said, ‘Sure, we can try and do that.’ And we were actually able to do it and did it pretty effectively.”

Hooyman and Schaefer wrote a paper recently accepted by the research journal Developmental Neuropsychology that demonstrates motor tasks are performed just as well at home as in the lab (read the pre-print of the article), which has confirmed the feasibility of conducting research through an online platform such as MindCrowd.

MindCrowd includes 20,000 older adults among its participants, and it enables research teams to reach more people more quickly than a traditional lab-based study. It also offers access to additional variables not available in research conducted in a single physical lab space.

“We will be able to understand how the way people play this game relates to lifestyle factors and cultural factors within the areas they live,” Hooyman says. “It would be of interest to us in trying to determine how the risk for dementia depends on geography.”

Kevin Duff, a clinical neuropsychologist at the University of Utah, is focused on the practice effect of Hooyman’s game — how an individual’s performance changes with increased familiarity to the task — and how that predicts later cognition and function.

Hooyman and the research team are looking at ways to increase accessibility and impact of the project. Hooyman is also exploring how to translate the game into a mobile experience because many of the people he is trying to reach access the internet from their smartphones or tablets much more often than through a desktop or laptop computer. This additional aspect of the research was recently funded by the Arizona Alzheimer’s Consortium.

Hooyman and his collaborators will continue to refine the online portions of the study as well as perform in-lab assessments to improve their methodology and discover ways they can predict cognitive decline before it happens to enable effective interventions.

While Hooyman is forging a new path for Alzheimer’s disease research, the true purpose of the Kirschstein Award is to support the multidisciplinary collaborations happening alongside that research.

“(The National Institute on Aging) likes the institution I’m at, the people I’m around and the research plan I had as well,” Hooyman says. “Everybody I have as a sponsor or co-sponsor [for this research project] is open to new ideas. They’re ready to try something interesting and see how it works.”

Duff’s specialization in practice effects is important to help Hooyman extend the reach of his game into the realm of neuropsychology, aging and dementia.

In addition to the MindCrowd platform, Huentelman also has “very interesting questions about how aging, lifestyle, genetics and cognition interact,” Hooyman says. This provides interesting opportunities to see how his game could help answer those questions.

Schaefer is one of the few biomedical engineering researchers looking at aging, motor and learning skills, and cognition together, and serves as an excellent mentor for Hooyman during this phase of his career.

“It is very beneficial for me to be able to take expertise from neuropsychology, from genetics and online research, and from motor and aging and combine this all together to formulate a career path that will make me a strong candidate as an independent investigator,” Hooyman says.

The fact that the research is innovative may have just been icing on the cake, Hooyman says.

“It is innovative because it merges data science, video game programming and neuropsychology to characterize and identify learning deficits that may be associated with Alzheimer’s disease,” Schaefer says. “It is also innovative in its methodology as it engages with its participants fully remotely. Thus, it is highly amenable to advancing research during the COVID-19 pandemic.”