There are scores of campus guides, directories and maps for Arizona State University. They’ll get you to your classes, show you where the nearest coffee is, and point out where to study, exercise and eat.

This is not one of those guides.

We're sure you can find the student union and the fitness center on your own. So this is a guide to the historic, the weird and the wonderful on all four ASU campuses. "What is that thing?" you might wonder. We’re here to answer that.

Stand where a president stood

At 2 acres short of a solid square mile and 136 years old, the Tempe campus has a lot of university history and goodies, like moon rocks, dinosaur skulls, meteorites, rare books and paintings by Georgia O’Keeffe and Diego Rivera.

Old Main, the three-story red brick Victorian pile with the balcony and elegant staircase on University Drive, is the heart and soul of the campus.

Lots of universities have beautiful old buildings. But not one where one of the four presidents carved on Mount Rushmore stood and spoke.

On March 20, 1911, former President Theodore Roosevelt was in town for the dedication of the Roosevelt Dam, located 60 miles northeast of the Salt River Valley. His trip to Tempe was only intended to be two or three minutes long. He was expected to speak standing from his car. 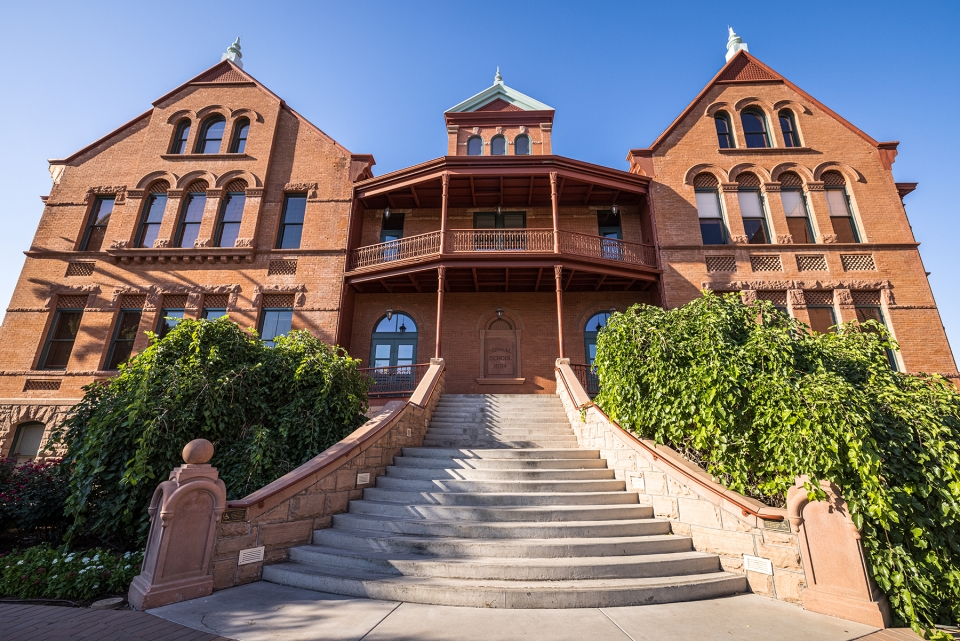 Old Main on the Tempe campus is one of ASU's signature buildings.

But when he arrived at the campus, he was greeted by hundreds of people. A huge flag hung from the second-floor balcony of Old Main. Roosevelt bounded up the steps to the first landing and spoke for 13 minutes.

“It is a rare pleasure to be here, and I wish to congratulate the territory of Arizona upon the far-sighted wisdom and generosity which was shown in building the institution,” Roosevelt said. “It is a pleasure to see such buildings, and it is an omen of good augury for the future of the state to realize that a premium is being put upon the best type of educational work.”

Arizona historians agree that the dam’s dedication is the single most significant event in the history of Phoenix. Walk up to the first landing, stand on the west side, and you’re exactly where the Bull Moose himself stood. There’s no plaque.

Closer to University Drive, on the west side of the Old Main lawn sits the Philomathian bench. There’s no plaque there either.

The Philomathians (derived from the Greek philomath, which means "a lover of learning”) were one of three literary societies organized in 1900. All students were required to participate in one of the societies: the Alphas — for freshman students only — the Olympians or the Philomathians. During this period, the three societies competed for an annual trophy. By 1912, all three were disbanded and were eventually replaced with voluntary clubs.

The Philomathian society returned in 1921 as an all-women’s club that returned to its roots as “Lovers of Learning.” They continued to promote writing, music, oration, essay and debate for the betterment of their club members and enjoyed going on weekend camping trips and desert picnics together. Just before the convocation of 1929, the Philomathian seat was dedicated by alumni. It has been on the Old Main lawn ever since. 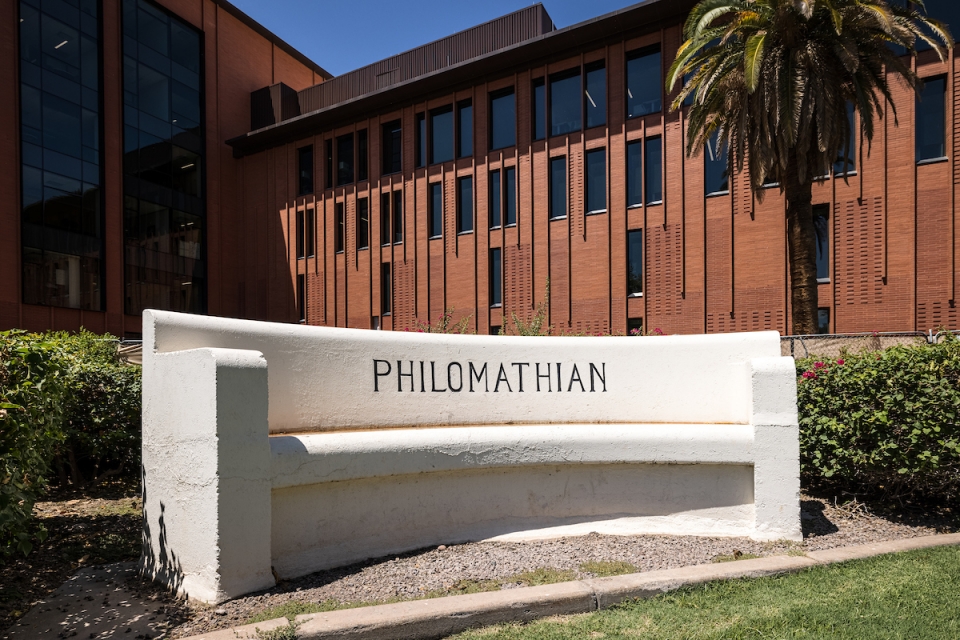 The Philomathian society alumnae donated the bench in 1929 to honor lovers of learning. The bench is located next to the recently renovated Durham Hall, near Old Main. It is one of the not-in-the-directory gems of ASU'sTempe campus, but worth noting. Photo by Charlie Leight/ASU

As time passed, the society became a sorority, adopted Greek letters and broadened activities to include dramatics, literature and social functions such as sports and music. In 1949, the Philomathian sorority was last listed in the Arizona State College annual, disbanding shortly thereafter. Since the 1950s, the Alpha Delta Pi sorority, which has loose ties to the Philomathians, has maintained the seat.

South and east of Old Main is the Life Sciences A Wing. Walk into the north hallway and you’ll find one of the most Arizona things at Arizona State – the Life Sciences Living Reptile Exhibit with about 18 to 20 reptiles on display (the displays change from time to time). Most are rattlesnakes, representing all of the species and subspecies found in Arizona.

The star of the show is Joey, an albino Western diamondback rattlesnake, son of Hector, who lived for 24 years. Joey, the albino Western diamondback rattlesnake, is a not-in-the-directory gem of ASU's Tempe campus and worth noting. He lives with his sister and mother in the Life Sciences A Wing, along with several other reptiles. Photo by Charlie Leight/ASU

The snakes tend to be mostly dormant, unless you happen through when the enclosures are being cleaned, and then they’re fired up.

No one seems to know exactly how long the collection has been in place, though most believe its origins extend from the 1960s when the School of Life Sciences was the Department of Zoology. At that time Herbert Stahnke — a scorpion expert who developed a scorpion antivenin — headed the department, and the treatment of bites from scorpions, rattlesnakes and Gila monsters generated interest in antivenin.

Go to the southwest corner of Dixie Gammage Hall (on Forest Mall, across from Coor Hall) and walk down a ramp and through a short tunnel. There you will find the Secret Garden, a lush, shady courtyard with seating, a lovely lawn and a fireplace. It’s not on official campus maps, but it’s been beloved for decades for peace and quiet. 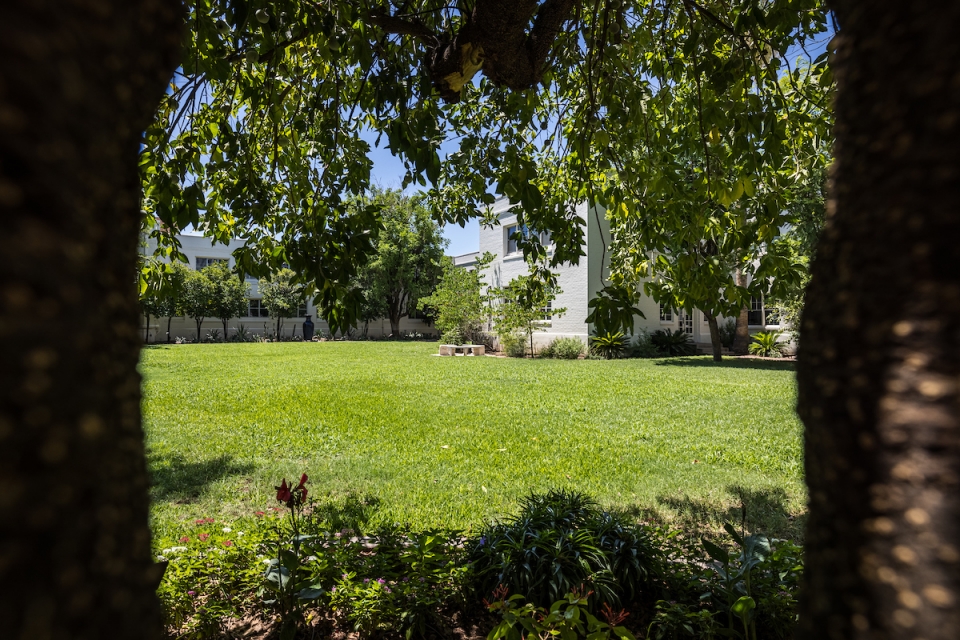 The secret garden, hidden between Dixie Gammage Hall and West Hall, is a favorite for Sun Devils seeking some solitude. Photo by Charlie Leight/ASU

The hottest – and coolest – spots on campus

The three hottest spots on campus, according to an ASU study:

1. At the center of the "X" sidewalks on Hayden Lawn. 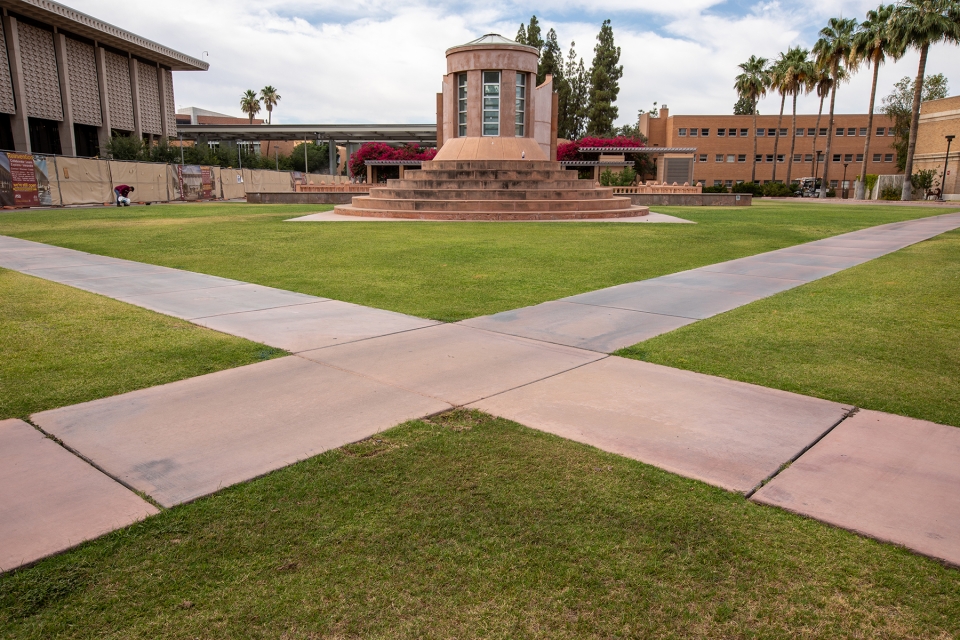 2. The walkway between Coor and Payne halls.

3. The intersection of Cady and Tyler malls.

The three coolest spots on campus:

1. The breezeway at Coor Hall. 2. Under the trees on the Old Main lawn.

3. Under the giant ficus tree just west of the Memorial Union.

What the foxes say

“We’re just fine” is probably what they say. The Tempe campus is home to kit foxes and gray foxes. People usually mistake them for cats. Three of them broke into the Memorial Union in September 2020. They’re often spotted by the residence halls, but they’ve been seen everywhere else: Noble Library, the stadium parking lot, Hayden Lawn. They’re not shy. One was spotted running across the Old Main lawn on a weekday afternoon, with hundreds of people around.

“I saw one really late at night by the bookstore and I thought I was hallucinating,” said Reddit user volkszaggen. 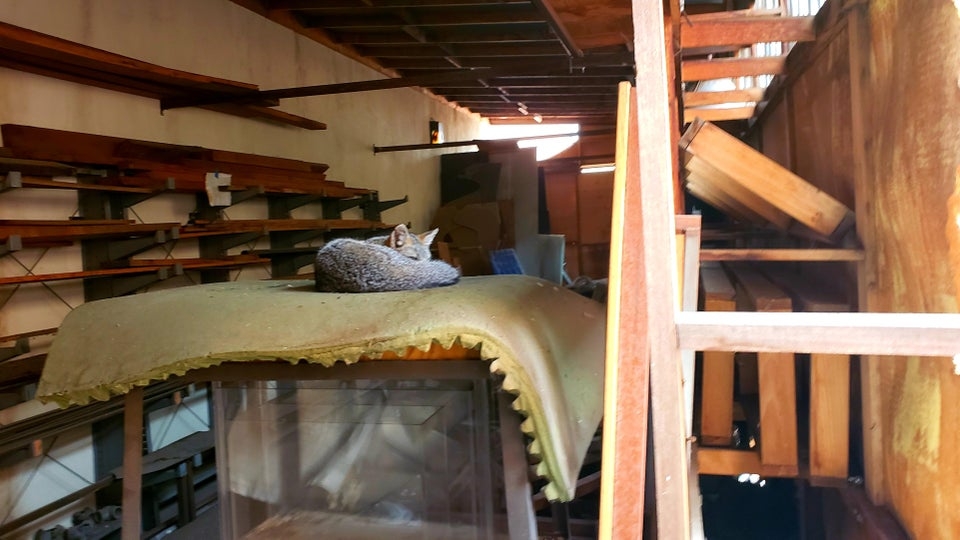 Gray fox snoozing in an unoccupied building on the Tempe campus. Photo by reddit user fwarrr 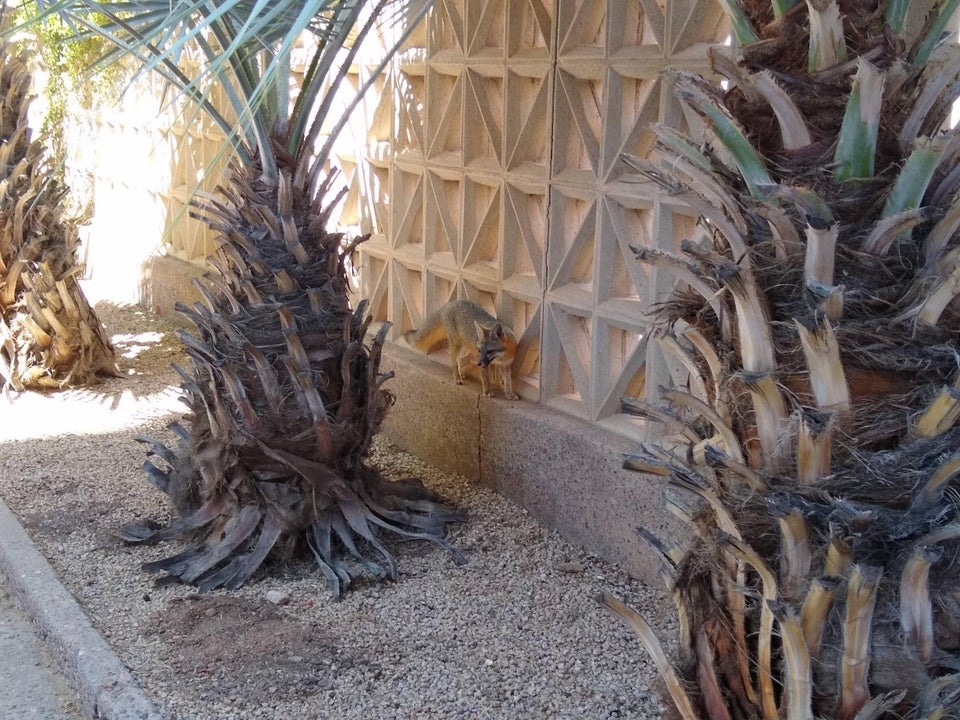 The old post office at 522 N. Central Ave. is a gathering place for students and has office space for counseling, career services and other units. Wander around the lobby and you’ll notice four spectacular murals.

The federal government had a program in the 1930s and 1940s to place art in public buildings. It was intended to be a morale booster after the Great Depression. Subjects were supposed to be uplifting, painted in an "American scene" style and depict ordinary citizens in a realistic manner — nothing in abstract or modern art styles. The works were supposed to be appropriate to their locales.

Two of the murals were painted by Oscar Edmund Berninghaus, a founding member of the Taos Society of Artists. The Taos Society was founded in 1915 by a group of visual artists enthralled with the beauty and culture of northern New Mexico.

Berninghaus and his colleagues believed a distinctly American art would emanate from Taos. "We have had French, Dutch, Italian and German art,” he said. “Now we have American art. I feel that from Taos will come that art."

The other two murals were painted by Laverne Nelson Black, who was fascinated with Native American culture. He was a shy man who never achieved any notable recognition in his life. Sadly, he was was poisoned by the paints he used in these murals and died shortly after completing them.

Most paintings from the Taos school hang in museums now. They are highly sought-after, extremely rare and command significant prices when they do appear on the market.

The Poly campus was originally a World War II aviation training facility. P-38 Lightning and B-17 Flying Fortress pilots trained there. There was also gunnery training, which required ammunition.

That was stored in bunkers south of campus, built by Del Webb in 1942. They look like mounds of dirt with a space in between. One mound was the actual bunker. The other side was a blast wall, designed to contain the explosion if it blew up.

They’re in good shape, but empty. When Navy SEAL candidates drop out of Hell Week, they ring a bell. When West campus students succeed, they ring the Bool bell.

The Bool bell was donated to the West campus in 1983 and was named for the couple who donated it, Herb and Betty Bool. Since then, the bell has been a symbol of achievement for West students.

The tradition is so popular that the bell can even be heard occasionally over the summer. 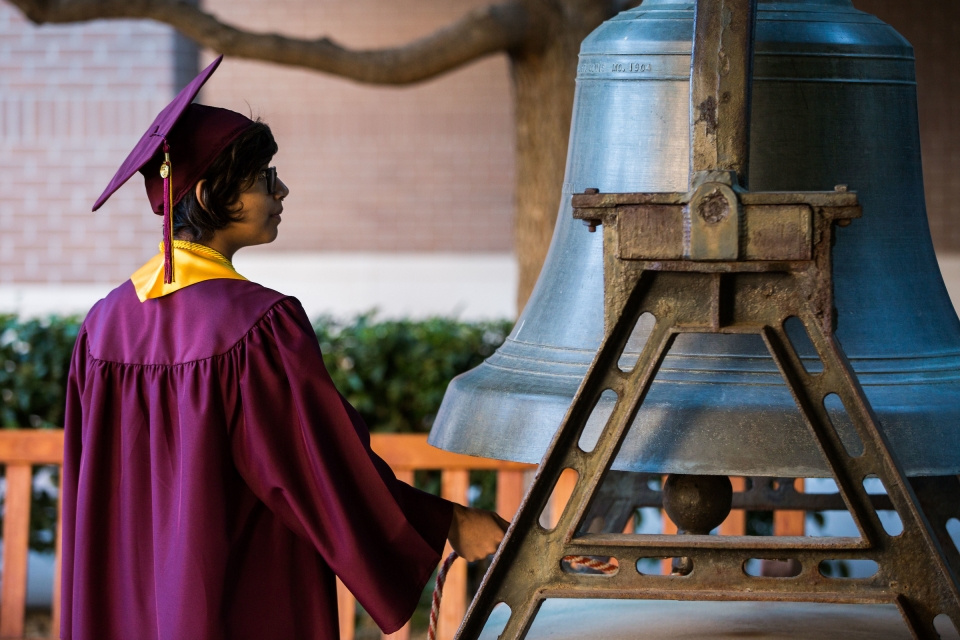 Ringing the Bool Bell in triumph. Photo by Charlie Leight/ASU

Top photo: A student studies in the peace and quiet of the Secret Garden on the Tempe campus. Photo by Charlie Leight/ASU