The hip-hop artist and actor Common knew at age 12 that he wanted to be a rapper, so he cultivated a strong sense of imagination and belief in himself that eventually led to stardom, including an Academy Award for best original song.

He described how harnessing one’s imagination takes work, but can be a powerful driver.

“When I wrote that first rap, I discovered something I really loved to do. It gave me a freedom that I found nowhere else, and it’s really where I found my purpose,” he said.

“Imagination is not only for the arts. It can apply to everyday life to create the reality you want to see.”

Common was a first-year student at Florida A&M University, a historically Black school, when he was offered a music contract. He signed it and left during his second year.

His mother, who was not fully on board with his plan, nevertheless did help him hone his motivational skills.

“My mother used to worry me about making a vision board. She had seen Oprah create a vision board,” he said. He kept putting her off, until finally, he did it.

“I wrote my visions and goals for the year, and things started to change. Every time I needed to be reminded of what I wanted to see for myself, I would go to that board and it would remind me,” he said.

“I was imagining myself as an artist before I knew how to get there. I was able to see myself as a hip-hop artist.”

One way to bolster imagination and self-belief is to surround yourself with like-minded people, he said. He was working with fellow rap artist Kanye West, who now goes by Ye.

“Kanye was producing my album and also putting out his own album. And you all know he has no problem believing in himself,” he said.

“We would do listening sessions and Kanye would hop up on the table, rapping so hard. I remember being inspired, and I wasn’t afraid to embrace greatness.”

Common said that some of the hardest work he has done has been on himself. He told the audience that the three things he’s focused on are gratitude, his belief in God and meditation.

“So often I would go into situations worrying about what would happen. There’s a difference between worrying and preparing for a moment,” he said.

In 2015, Common performed the song “Glory” at the Academy Awards show along with his co-writer, John Legend.

“I remember doing everything I could do to be present. To this day it’s one of the most joyous moments in my life because I cleared the energy of everything else except being there,” Common said.

He and Legend won the Oscar for best original song that night for “Glory,” from the 2014 film “Selma.” Common played civil rights leader James Bevel in the movie.

The rapper said that as he found success and worked on himself, he also needed to work on helping the world. In 2012, he founded the Common Ground Foundation, a nonprofit that seeks to empower young people through mentoring, service projects and arts programs. He has also become an activist for social justice causes, spending time with people who are incarcerated.

“I’ve been in some of the darkest places I’ve ever been in my life in these prisons. I’ve met some of the most enlightened people I’ve ever met — people who have been dehumanized by a country and a system, but they see themselves differently and are using their imaginations to change their trajectories,” he said.

“They see themselves as human beings. If they can do the work from behind bars using their imaginations, then we can definitely use our imaginations to change things.” 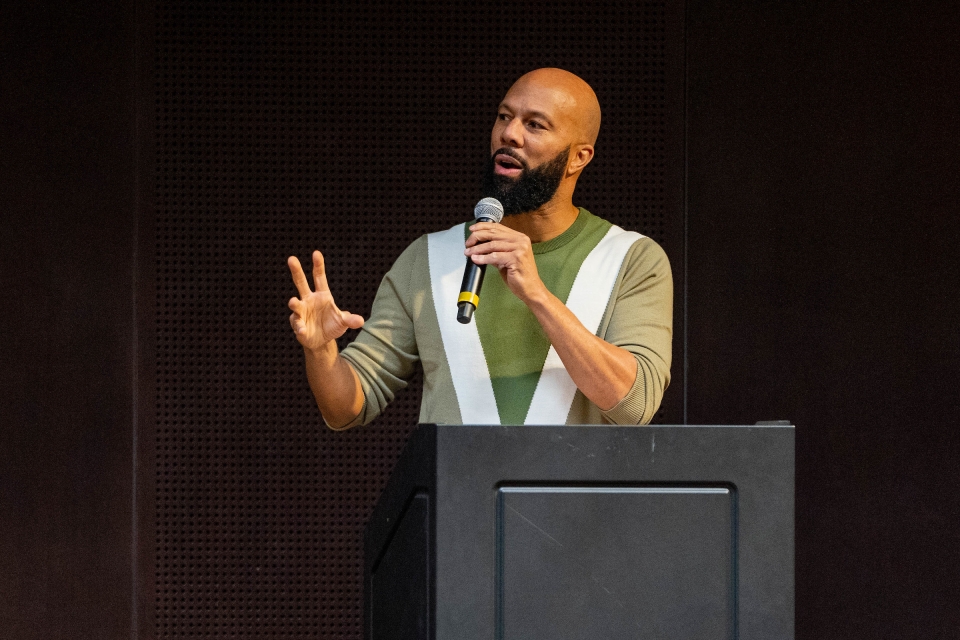 Rapper and actor Common told an ASU audience that upcoming projects include scoring a film and performing on Broadway, during the Nov. 15 Flinn Foundation Centennial Lecture, sponsored by Barrett, The Honors College. Photo by Samantha Chow/ASU News

After his talk, Common spent more than an hour answering questions from the audience.

What he would tell his 18-year-old self: “Be open to discovering. I would tell myself to be easy on myself. One thing I wish I had done at 18 was pursue a musical instrument earlier. I’m around so much music now, and the artists I love and work with communicate in a language I don’t understand all the time.”

Will he go into politics? “I know how important the policymakers are, and the people in politics. But I feel like if I participated in it, it would eat away at my heart and soul. I’m too authentic to play the political game. I’ll support the ones who are the most authentic and say, ‘I’ll let you deal with all that stuff.’"

On playing a police officer in the 2018 film “The Hate U Give”: “We were living at a time when so many people were being killed by policemen, so for me to play a policeman and try to give that perspective was a challenge for me. In every aspect of my life I was speaking against police brutality. It was difficult for me to go fully into that space because so much of my real life was raising awareness and I was dealing with mothers who had lost daughters and sons to police killings. But it was not judging the character and showing his humanity.”

Top image: Hip-hop artist and actor Common was the speaker for the 2021 Flinn Foundation Centennial Lecture on Nov. 15 at the Memorial Union on the Tempe campus. Photo by Samantha Chow/ASU News