Drawing on inspiration from photosynthesis and the way it can achieve high efficiency in plants, Regents Professors Tom Moore and Ana Moore in Arizona State University's School of Molecular Sciences and their groups, together with colleagues from the Department of Chemistry at Princeton University (including Professors Gregory Scholes and Robert Knowles), have introduced a bioinspired catalyst that lengthens the productive state of some chemical reactions.

“Working with the Princeton groups of Knowles and Scholes has given us new perspectives and applications for our bioinspired, artificial photosynthetic systems,” Ana Moore said.

“In this case, we have reengineered a photocatalyst important in the chemical industry using the principle of proton-coupled electron transfer (PCET) to provide improved catalytic efficiency.

"PCET is widely used in nature’s catalysts where low energy reaction pathways yielding a single product are essential. It is rewarding to find a practical application for the PCET constructs that we have recently developed. Improving the catalytic efficiency of reactions that result in compounds with specific pharmacological activity could contribute to more sustainable development of a greener chemical industry.”

The team employed PCET to manipulate the photocatalyst in order to slow charge recombination, essentially mimicking the process that keeps photosynthesis humming along.

Their mechanism stalls one elementary step in the process by a factor of 24 relative to a reference compound. PCET is a class of reactions involving the transfer of an electron and a proton.

At the core of this collaborative research is a chemical model, a PCET substructure, developed by the researchers here at ASU. The model is linked with an iridium complex that effectively lessens the driving force of charge recombination, thus prolonging the active state in which chemistry can take place.

The Moores and colleagues have made this model, benzimidazole-phenol (BIP), that is chemically very similar to those two amino acids in photosynthesis. This is then used to control the direction of electron transfer in catalysis.

The paper, “PCET-based Ligand Limits Charge Recombination with an Ir(III) Photoredox Catalyst,” was just published in the Journal of the American Chemical Society.

The research combines contributions to the mechanisms of photocatalysis from the Knowles lab, ultra-fast time resolved spectroscopy from the Scholes lab, and the BIP model from the labs of Thomas Moore and Ana Moore. 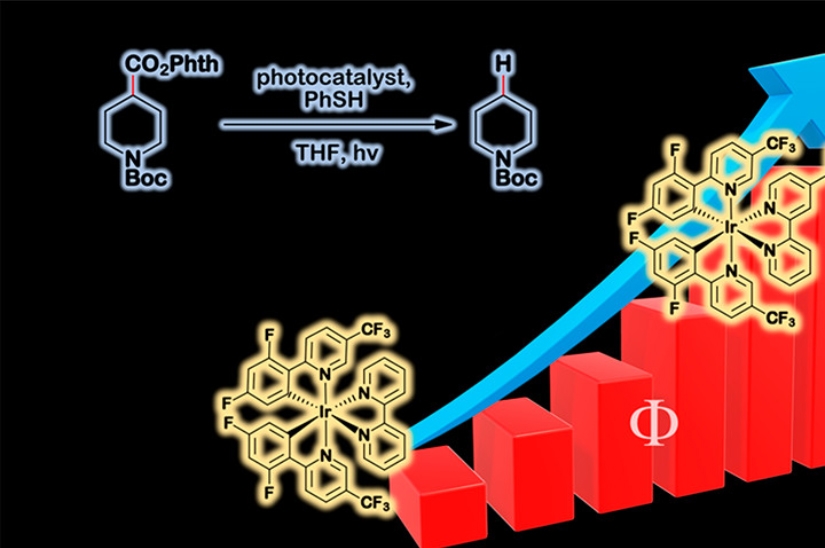 This graphic shows the quantum yield of the reaction, which is how researchers measure the efficiency of a light-activated reaction. Graphic by Anna Zieleniewska.

The research fulfills one of the top priorities for the Princeton-based Bioinspired Light-Escalated Chemistry (BioLEC) group, an Energy Frontier Research Center established in 2018 and funded by the Department of Energy. BioLEC is directed by Scholes, Princeton’s William S. Todd Professor of Chemistry and chair of the department.

“This absolutely came about because of the center. Rob, Tom and Ana were the intellectual drivers of this idea,” Scholes said. “Here, we added an additional ‘circuit’ to the molecular photocatalyst that suppressed the deactivation pathway. Our circuit serves as a kind of buffer, holding the high energy species in place until the catalyst can initiate the chemical reaction. I think it’s a great success story.”

“Working with Rob and Greg and the center students and postdocs has proven to be even more exciting and rewarding than we hoped for when the idea was first formulated for the BioLEC proposal,” the Moores said.

In nature, photosynthesis occurs when a plant absorbs light that generates a charge separation in its “reaction center.” That reaction drives both the oxidation of water and the fixation of carbon dioxide into fuels used by the plant. Charge recombination essentially short circuits the photosynthetic process. So, nature has evolved ways to sustain that separation using so-called redox relays.

Researchers used these very redox relays in their investigation as the essential components of a series of short-distance, fast redox-equivalent transfer steps that effectively compete against charge recombination.

Evolutionary processes selected these redox relays where through the transfer of an electron and a proton between two hydrogen-bonded amino acids, it can do really fast transfers that further separate the charges.

By moving the charges further apart quickly, you prevent that charge recombination. That leads to the efficiency of photosynthesis. The researchers made use of that idea.

The structure of the BIP model developed by the Moores is similar to those two amino acids.

“Sure enough, studies in the Scholes’ lab of the reengineered catalyst with the BIP showed longer lifetime for the reactive radical intermediate and – here’s the proof in the pudding – the yield of the reaction was more than doubled,” Tom Moore said. “Nature uses PCET in catalysis, and Mother Nature knows a thing or two about efficient, sustainable chemistry.”