Given the sheer number of incarcerated individuals in the United States — the country with the highest incarceration rate in the world — it’s not uncommon to know someone who has either been affected by the prison system or who has experienced it for themselves.

Natalie Diaz knows two: her brother and her sister. And as she struggled to come to terms with what being incarcerated meant for them, for her and for the world in general, there were two books that guided her understanding.

“I found ‘Golden Gulag’ (by Ruth Wilson Gilmore) in grad school when I realized I needed more language for what was happening to my brother,” Diaz said. The other book, “Ossuaries,” by Dionne Brand, came to her later, when her sister was in prison.

Both of them, Diaz said, “remind us that we are a constellation of lives, homelands and waterways … that we must have the courage to ask impossible questions.” Questions like, “Whose freedom must I also imagine in imagining what freedom means to me?”

As fate would have it, Diaz had the opportunity to engage in a discussion with both Wilson Gilmore and Brand on March 31 as part one of a two-part virtual series led by the National Book Foundation’s Literature for Justice program, in partnership with Arizona State University's Center for Imagination in the Borderlands, for which Diaz serves as director.

For three years, the National Book Foundation’s Literature for Justice program has offered literature as a vehicle for conversations on the topic of mass incarceration, distributing selected books — which this year included “Golden Gulag: Prisons, Surplus, Crisis, and Opposition in Globalizing California” and “Ossuaries” — to prisons and detention centers across the U.S.

Part 2 of the series will take place Wednesday, April 7, wherein Diaz will be in conversation with Nicole R. Fleetwood, writer and curator of “Marking Time: Art in the Age of Mass Incarceration,” and scholar Sarah Haley, author of “No Mercy Here: Gender, Punishment, and the Making of Jim Crow Modernity,” for a discussion on the convergences and divergences of academia, archives and art in the carceral system.

Jeffrey Cohen, dean of humanities in The College of Liberal Arts and Sciences at ASU, praised Diaz for her work in furthering the mission of the Center for Imagination in the Borderlands to broaden conversations around Indigeneity and catalyze change for the future.

“Through Natalie Diaz’s visionary leadership, the Center for Imagination in the Borderlands has been partnering with arts and literary partners nationally to bring about new possibilities,” he said. “The center’s work continually demonstrates the intimacy of creative writing to engendering a more just world. In collaboration with the National Book Foundation, Literature for Justice raises awareness of a crisis of our times: mass incarceration and the diminishing of the lives of those who find themselves within prison walls.” 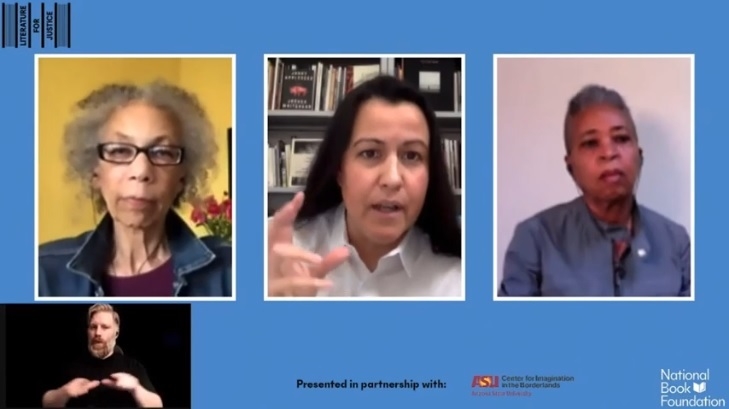 During the first part of the series, attendees were treated to readings from both Brand and Wilson Gilmore, followed by a discussion with Diaz. The first question she asked her guests to consider was how their notion of home — something Diaz sees as linked with incarceration — has changed over the past year due to the pandemic.

“I’m here in my homeland, which is also very near to the U.S.-Mexico border, and so when we think of the prison system … or mass incarceration, when we think of migration, these things are all very tethered,” Diaz said.

Brand agreed, sharing that as a Black woman, she has always felt an intimacy with water.

“Water is the first thing in my imagination,” she said. “Maybe that has something to do with the Middle Passage. Well, not maybe, most definitely.”

Brand went on to explain that her feeling of belonging in water gives her a sense of connection to “the struggles of people for liberation from the regime of capitalism and the regime of racial capitalism. … That has been my touchstone for the solidarities that I’ve imagined and tried to write about. And the in-betweenness of sort of making those solidarities or making those imaginative spaces of freedom among people who were subjected to that racial regime, that regime of capitalism.”

The discussion zeroed in on that theme, looking at the term “relationality” in particular, and what it means to people who have been displaced and oppressed.

“It’s a term that’s important to Indigenous and Black people in the diaspora,” Diaz said. “Yet I also hear it being used in an un-complex way, to say that we’re all related because we’re all alive. But it requires work … it’s laborious in a lot of ways. … (Something I recall Ruth saying about solidarity is that) solidarity is made and remade; it never just is.”

At a point in time when the topic of solidarity is at the forefront of the minds of those who seek social justice, Wilson Gilmore took the opportunity to expand on what she believes makes true solidarity possible: something she calls “radical listening.”

“Listening is absolutely essential to understanding and creating and maintaining a language adequate to making the web of understanding, misunderstanding that enables solidarity to make and remake itself,” she said. “… Whatever size the ‘we’ is, there’s some kind of radical listening that has to go on.”

A video recording of the full discussion can be viewed on the National Book Foundation’s YouTube page for two weeks following the date of the event.