Over the last two decades, scientists have found ice in many locations on Mars. Most Martian ice has been observed from orbital satellites like NASA’s Mars Reconnaissance Orbiter. But determining the grain size and dust content of the ice from that far above the surface is challenging. And those aspects of the ice are crucial in helping scientists determine how old the ice is and how it was deposited.

So planetary scientists Aditya Khuller and Philip Christensen of Arizona State University, with Stephen Warren, an Earth ice and snow expert from the University of Washington, developed a new approach to determine how dusty Mars ice really is.

By combining data from NASA’s Phoenix Mars Lander and Mars Reconnaissance Orbiter with computer simulations used to predict snow and glacier ice brightness on Earth, they were able to successfully match the brightness of Martian ice and determine its dust content. Their results have been recently published in AGU’s Journal of Geophysical Research: Planets.

Mars is a dusty planet, so much of its ice is also dusty and much darker than fresh snow we might see on Earth. The dustier the ice is, the darker and thus warmer the ice gets, which can affect both its stability and evolution through time. Under certain conditions, this might also mean that the ice could melt on Mars.

“There is a chance that this dusty and dark ice might melt a few centimeters down,” Khuller said. “And any subsurface liquid water produced from melting will be protected from evaporating in Mars’ wispy atmosphere by the overlying blanket of ice.”

Illustration of how small amounts of Martian dust can lower the brightness and change the color of Martian snow. The colored lines in the chart (blue, red, yellow and violet) correspond to how small amounts of dust reduce the brightness of pure snow (represented by a black line) toward the brightness of pure Martian dust (represented by a gray line). The simulated "color" of each type of snow/dust is shown in the black boxes. Notice how the color of snow with 0.1% dust appears very similar to the color of pure dust, as is also seen on the Curiosity rover after a dust storm (Right) Credit: NASA/JPL-Caltech/MSSS.

Based on their simulations, they predict that the ice dug up by the Phoenix Mars Lander formed by dusty snowfall, sometime over the last million years, similar to other ice deposits found previously across the mid-latitudes of Mars.

“It is widely believed that Mars has experienced multiple ice ages throughout its history, and it looks like the ice being exposed throughout the mid-latitudes of Mars is a remnant of this ancient dusty snowfall,” Khuller said. 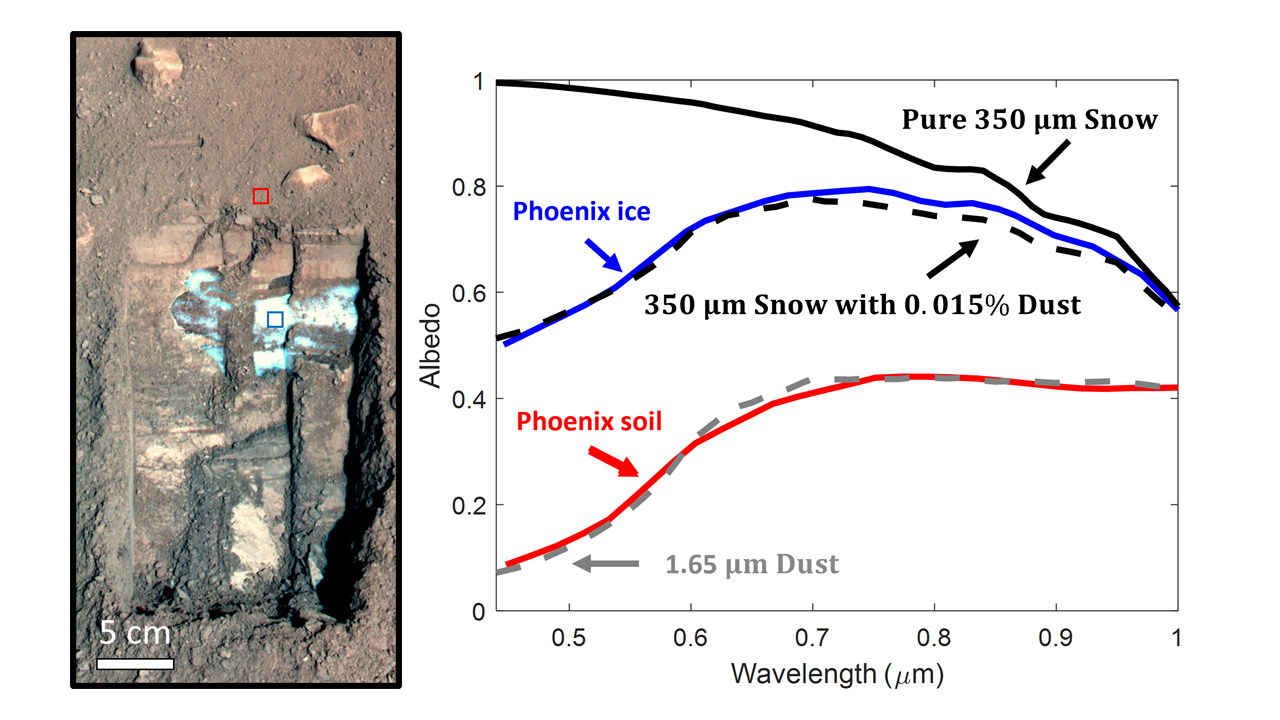 For next steps, the team hopes to further analyze ice exposures on Mars, assess if the ice could actually melt, and learn more about Mars’ climate history.

“We are working on developing improved computer simulations of Martian ice to study how it evolves over time, and whether it might melt to form liquid water,” Khuller said. “The results from this study will be integral to our work because knowing how dark the ice is directly influences how warm it gets.” 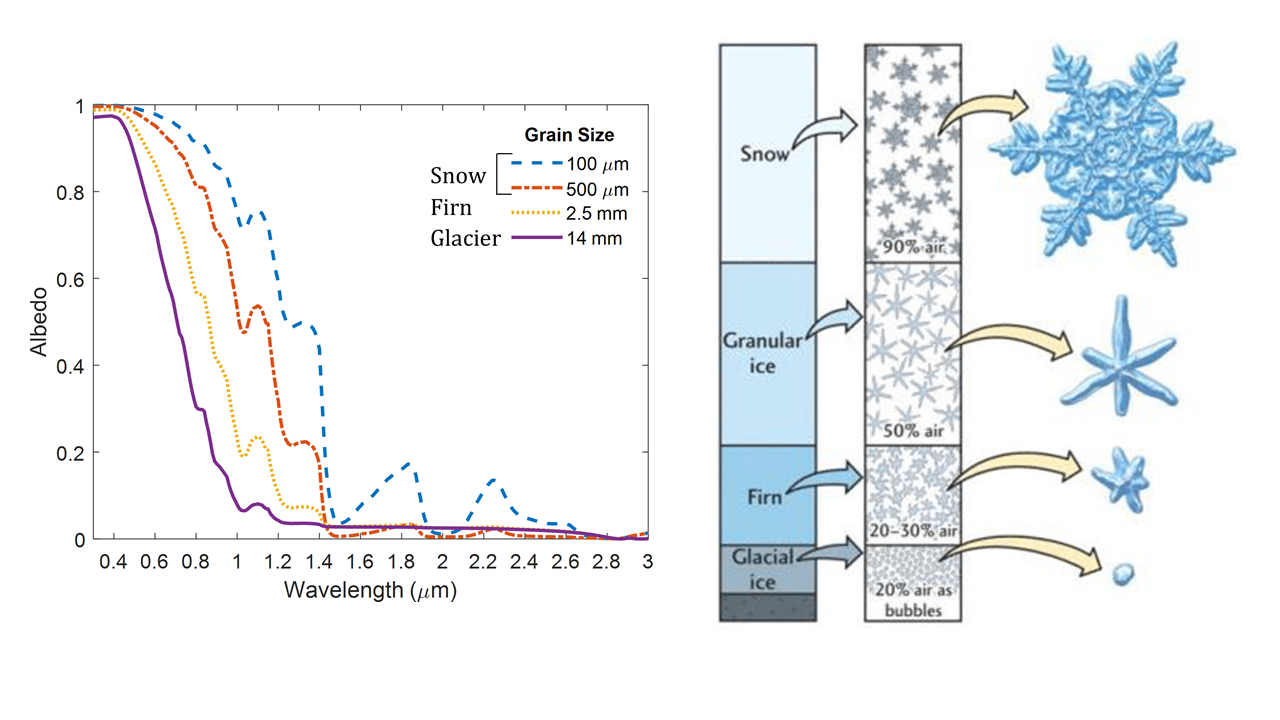 As snow grains grow and coarsen, the amount of air between the grains reduces and the ice appears darker. This reduces the number of light reflections within the ice and increases the probability that the light gets absorbed by the ice. As the grains get larger, the brightness reduces, and older snow, firn and glacier ice appear darker than fresh, clean snow. The figure on the right illustrates how the air within snow gradually reduces to form firn, and eventually glacier ice. Credit: Mattavelli (2016).