Hollywood has reached another milestone in LGBTQ representation, and this one is definitely moving the needle.

Tinseltown is buzzing over the recent Emmy nomination of Mj Rodriguez, who is the first transgender performer to receive this nod in a major acting category.

Rodriguez has been nominated for outstanding lead actress in a drama series for FX’s “Pose,” which focuses on the underground ballroom culture of the 1980s and ‘90s in New York City. The show also features the largest cast of transgender actors ever assembled for a scripted series.

The 30-year-old actress said she hopes to use her platform to inspire a generation of trans women to dream big.

“I would like trans women, and specifically trans women of color — especially younger girls who are trans and of color — to take away that this is more than possible,” Rodriguez recently told The New York Times. “If you’re persistent, if you keep your eyes on the prize, if you never let anyone tell you otherwise, you’ll keep living and knowing that your existence is worth it, and that you have a purpose on this earth.”

ASU News spoke to Associate Professor Julia Himberg, director of ASU’s film and media studies program and author of “The New Gay For Pay: The Sexual Politics of American Television Production,” about this historic nomination and what it will mean for Hollywood and the LGBTQ community. 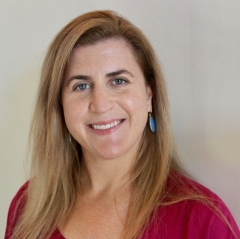 Question: Do you consider this a Hollywood milestone and why?

Answer: In some ways, yes. It sets a new standard for Hollywood and for audiences. Ultimately, these kinds of moments can contribute to broader social and institutional change. This is especially true for trans people — according to studies the majority of Americans say they don’t know a trans person. What this means is that most of the information that Americans get about who trans people are comes from the media. This is why representation matters so much. It can impact how people view an entire segment of society that they would otherwise not learn about. But I always think it’s important to be cautious about big proclamations when it comes to changes like this one. It is pivotal but it is also a singular change that requires leaders in Hollywood to follow from in the decisions they make going forward. Systemic change takes time and intention.

Q: Since the acting categories are divided between males and females, do you think Hollywood will open this up to other categorizations?

A: It offers a chance to question the binary nature of gender that’s been constructed, which certainly opens it up to the possibility that Hollywood may change the way it categorizes people for events like awards. It also has the potential to reinforce the binary though. I say this because what we have mostly seen are images of trans men and women who conform to conventional ideas about gender — so we see trans women who are exceptionally feminine and trans men who are conventionally masculine. There aren’t many actors or images in mainstream media that challenge this binary — instead what we see tends to reinforce traditional ideas of what it means to look and act like a man or woman.

Q: Do you feel this nomination will lead to more scripts and parts for the LGTBQ community?

A: It has the potential to, because today there is a bigger push than ever to see more diversity in front of and behind the camera in Hollywood. And there are more outlets than ever competing for viewers’ attention so we are seeing more LGBTQ stories than in the past, particularly more stories about BIPOC LGBTQ people. We will see if this is the kind of tipping point that Time magazine declared when they put Laverne Cox on the cover in 2014. That was a crucial moment and there have been tremendous strides since then. On the other hand, in this same time, there have been systematic, organized and often successful attempts at all levels — local, state and federal — to pass anti-trans bills that make life less safe and secure for trans people. So there is a strong backlash working to instate or reinstate discriminatory policies against trans people, and they tend to treat Hollywood as a liberal bastion in the service of a socially progressive agenda.

Q: Is there a potential backlash from the public?

A: This question makes me think of the last lines of the documentary "Disclosure" (about trans representation in film and television). In it, Laverne Cox, who also executive produced the film, says “I wonder if people who love these shows … will reach out to trans people in need and work to defeat policies that scapegoat us, policies that discriminate against us, policies that dehumanize us. Because until that happens, all that energy from the silver screen won’t be enough to better the lives of trans people off the screen.” While the media gets a lot of attention for making positive social change, this is an important question to ask — what are the limits of representation and how do they affect everyday trans people?

Q: Final thoughts on this subject?

A: More than anything I see this as a victory for trans actors who for so long have not been hired. Despite being represented in film and television since the earliest moving images (D.W. Griffith featured trans characters in his films — in damning and damaging ways), trans actors have long struggled to work in Hollywood. So this Emmy nomination sets the bar higher, hopefully reinforcing to executives and casting directors that trans stories can and should be told by trans actors. (The "Pose") nominations more generally also send a hopeful message that shows with trans writers, directors and actors are becoming a more accepted and even expected part of the television landscape. This is an especially notable victory for Rodriguez and much of the show’s cast and crew as trans people of color.

Top photo: Mj Rodriguez as Blanca in a scene from "Pose." Photo courtesy of FX.