The time is right to implement a new vision to bolster the success of North America, said Mexico’s top diplomat in the U.S. during a meeting with Arizona State University leaders in Tempe on Oct. 14.

Mexico’s U.S. Ambassador Esteban Moctezuma Barragán met with ASU President Michael M. Crow and others to gain a better understanding of university capabilities that can lead to increased collaboration for the betterment of both nations, with an emphasis on the Arizona-Sonora region.

“We are in on every possible level,” Crow said. “The United States and Mexico are both still fledgling democracies moving toward this set of ideals as manifested in each of our constitutions that are very significantly powerful, if we can get there.

“And this notion of equity, fairness, building human lives to our highest level of attainment, that is what we do.”

The ASU president highlighted the university’s evolution, made possible by “modifying everything” — including culture, connections and linkages. As the university has evolved, it has also grown significantly. ASU’s Ira A. Fulton Schools of Engineering is an example, Crow said. The school grew from educating 6,000 students years back to nearly 26,000 today.

As of this year, ASU is now the No. 1 producer of STEM graduates, Crow said.

The ambassador also learned of the recent reorganization that established ASU’s Academic, Knowledge and Learning Enterprises. The three pillars will move the university forward to not only expand education to more people but to solve critical problems affecting the region, such as water availability and climate change.

“Anything is possible,” Crow said. “One should not think of universities as static, as resistant. We have built a completely new model for education here.” 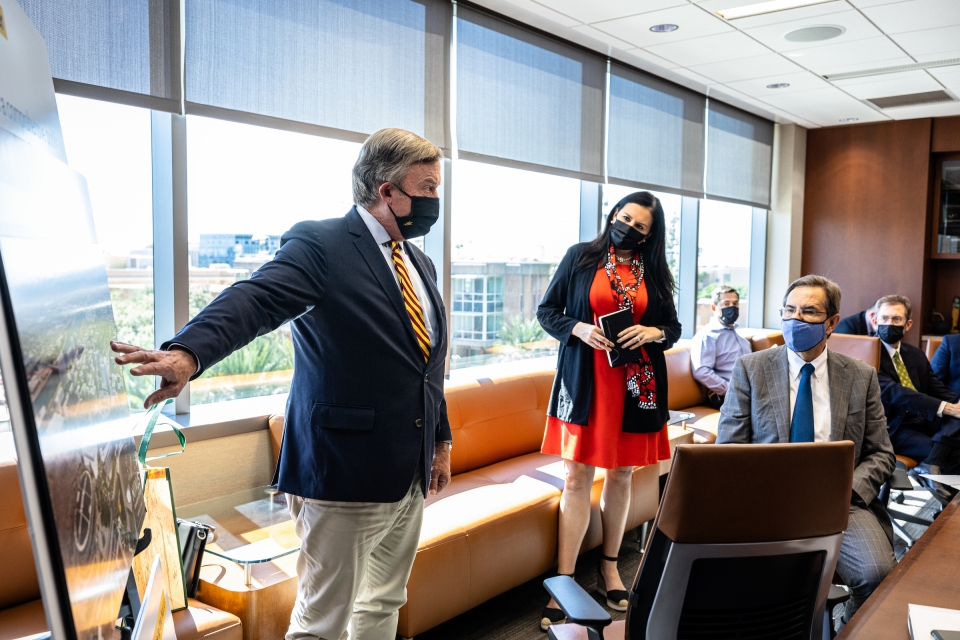 Moctezuma Barragán is optimistic on the current state of U.S.-Mexico relations and said it has encouraged a new binational dialogue on economics, health, security and education.

“I believe this is one of the times in history that there is real understanding between the two governments, and the respect of each other’s sovereignty,” Moctezuma Barragán said.

The ambassador is concerned about the economic competitiveness of the North American region and believes Arizona and Sonora can be the impetus toward addressing the challenge.

“We can start a new approach to our relationship in terms of research, development and academics,” Moctezuma Barragán said. “We also have a window of opportunity because the new governor of Sonora is a person that understands this very well. We can make a team, including the (Phoenix) consul, which is also very active, to promote this vision, to start in this region a broader view of what the relationship must be.”

Extending beyond Sonora, Mexico’s National Association of Higher Learning Institution (ANUIES) is an ideal partner since their membership consists of Mexico’s public universities, Moctezuma Barragán said. ANUIES can create projects at the national level that can then be brought to universities like ASU.

Working on joint and binational initiatives with mutual objectives to benefit both nations is a high ASU priority.

“We want to learn together and solve problems together,” Crow said. “We are interested in working on projects that set the example of what can be done.”

Paola Hidalgo, ASU’s senior director for Mexico relations, updated the ambassador on existing projects with Mexican institutions, including the thousands of teachers throughout Mexico who graduated from ASU’s “The Era of Active Learning” course. Taught by Rafael Rangel Sostmann, special adviser to Crow, the course introduces educators to technological tools and concepts to help create more engaged learning. This has become a valuable tool during the COVID-19 pandemic after many schools turned to remote learning.

Neal Woodbury, vice president for research and chief science and technology officer for ASU’s Knowledge Enterprise, provided the ambassador an overview of the university’s pandemic response. It included how ASU quickly developed testing capability, which recently surpassed 1 million tests. The university partnered with the state of Arizona on testing, and also on establishing and managing mass vaccination sites.

“We’ve been one of the state’s primary partners, if not the primary partner in COVID testing,” said Jim O’Brien, senior vice president of university affairs and chief of staff to the ASU president. “This goes to President Crow’s point about universities, that you cannot underestimate what we can do, given the unbelievable resource that we have.

“We can invent the test, and we can deploy the test at scale in a short time, then continue to perfect the test with other technologies around it to build a whole portfolio, which then becomes integrated. And the more we can do that with this portfolio of technologies and the integration of it, the better the chances we can manage this virus, or the next one.”

Moctezuma Barragán praised ASU’s work with Mexico, and encouraged continued collaboration to include crafting a view on the region’s future and building a framework of goals for Arizona-Sonora, that can be led by the universities.

“Mexico is in unbelievable forward movement,” Crow said. “So we are excited to be a part of it.”