A new table made by Indigenous people for an Indigenous space at Arizona State University evokes the ancient canal system built by the Hohokam tribe that first sustained people in the Valley.

The 25-foot table, a collaboration between a local artist and the Indigenous Design Collaborative in the Design School at ASU, was unveiled Monday night during an event at the Labriola National American Indian Data Center at Hayden Library on the Tempe campus.

Selina Martinez, a designer for the collaborative who earned her bachelor’s and master’s degrees at ASU, designed the table based on sketches by Jeffrey Fulwilder, a member of the Salt River Pima-Maricopa Indian Community.

“We wanted to incorporate a connection to the land and to water and why people are here in Arizona and the ancestors of this place,” said Martinez, a member of the Pascua Yaqui tribe who is working toward becoming a licensed architect. She also was the project manager for the table, which was fabricated in Phoenix. Claudio Vekstein, design director of the collaborative and a professor of architecture, worked closely with Martinez on the detailing of the table.

The table is made of blue fiberglass resin, a durable material used to make boats, and is coated with copper paint atop a steel base. Lit from below, the translucent surface glows like a river down the length of the table, which has 12 matching blue and copper fiberglass chairs.

Installation was tricky. The heavy table could not be brought up the stairs to the Labriola Center, which is on the second floor. So the glass façade of the building was removed and a crane eased the table through the opening. 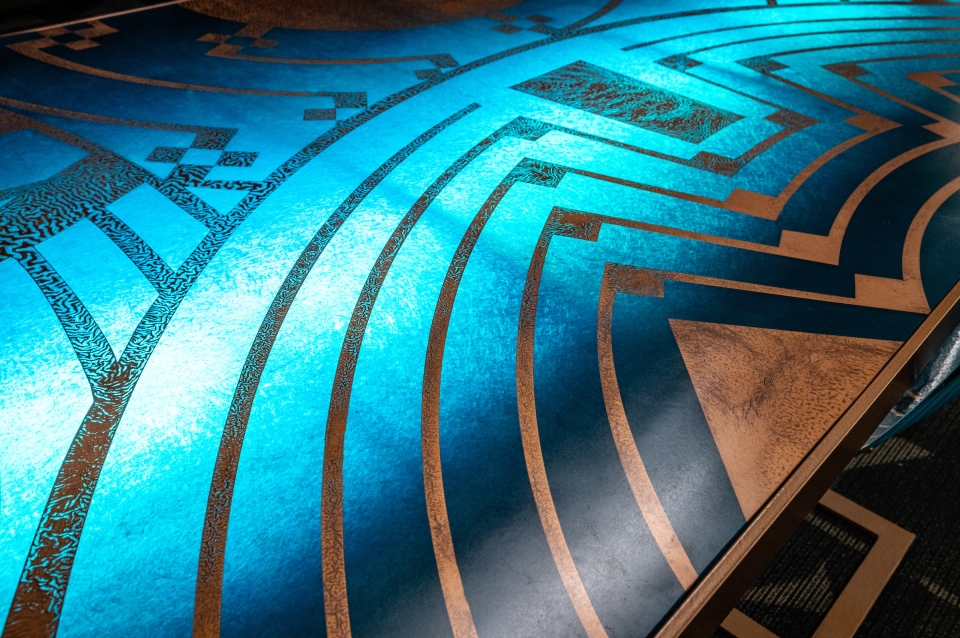 The table is made of fiberglass resin, the material used to make boats, and is coated with copper paint. The textured surface of the paint was inadvertent — the result of a chemical reaction. Photo by Charlie Leight/ASU News

The yearlong collaboration by Fulwilder and Martinez was during the pandemic, so all communication had to be on the phone. Fulwilder said that during one conference call, he sketched as they spoke.

“Water kept crossing my mind. That’s important to us, but how can we put this on the table?” he said.

“The idea of it was when you’re looking at the river and the current from underneath pushes up the water, it forms all these designs. That’s what it is.”

The design also incorporates other symbols important to the tribe, like baskets and squash blossoms.

Fulwilder said that in his work, he wants to catch the viewer’s attention.

“I want them to want to know more about us so that maybe they can be more respectful to the land and respectful to our ways,” he said. 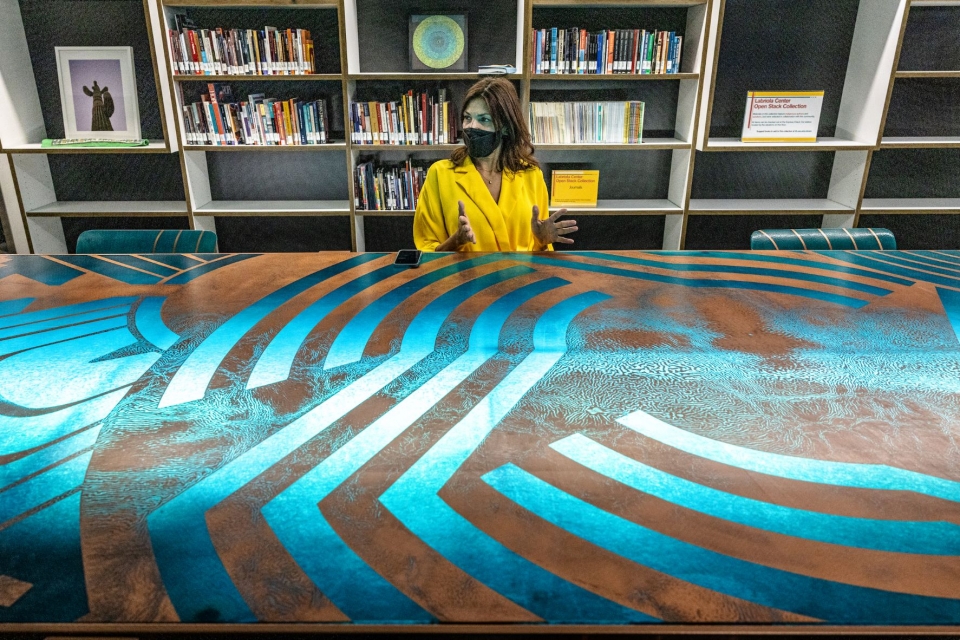 Wanda Dalla Costa, Institute Professor and creator of the ASU Indigenous Design Collaborative, said it's important to work with local artists, who bring the perspective of their communities. Photo by Charlie Leight/ASU News

Wanda Dalla Costa, Institute Professor in the Herberger Institute for Design and the Arts, created the Indigenous Design Collaborative a few years ago, and one of the first projects was to gather students to brainstorm ways to make the campus more welcoming. The result of their project was a book released in 2018, “Indigenous Placekeeping: Campus Design + Planning.”

“Within this book we researched the 22 tribes in Arizona, and we came up with 16 proposals,” said Dalla Costa, who is an architect and taught the studio course that produced the book. One of the proposals now completed is the welcome wall of tribal languages on the lower level of Hayden, made of wood and resin with the help of local artists.

“We work a lot with artists because we feel they bring the perspective and the worldview from the local communities,” Dalla Costa said, referring to artists as “co-pilots.”

“With the (Indigenous Design Collaborative), our vision is about preparing the next generation of designers, of which Selina is one, to act as field transformation ambassadors, transforming the field of architecture and design.” 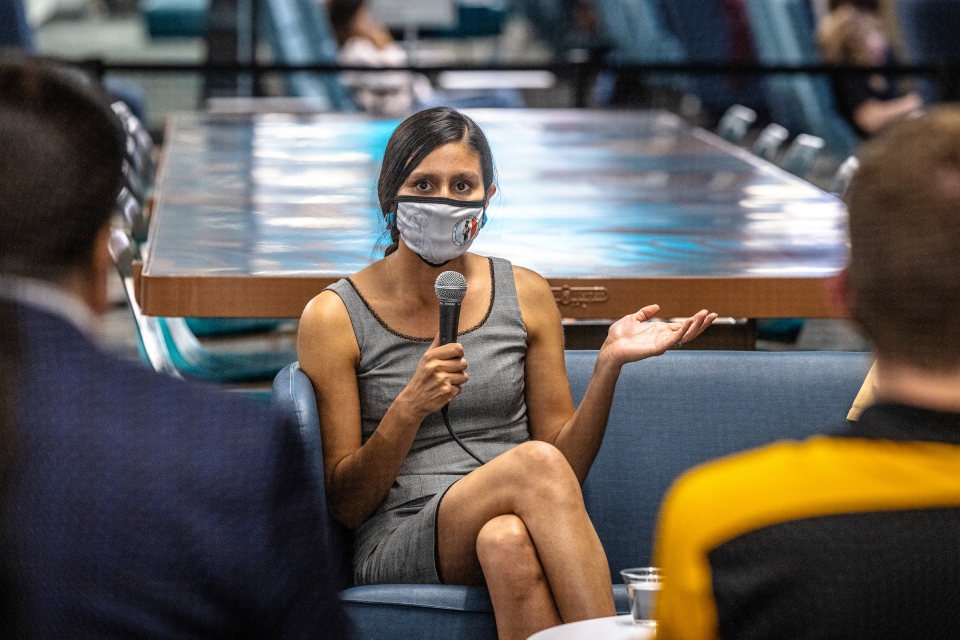 Selina Martinez, a designer with the ASU Indigenous Design Collaborative, created the table based on sketches from artist Jeffrey Fulwilder. The two had to communicate over the phone during the pandemic. Photo by Charlie Leight/ASU News

Martinez said that having cultural representation is important on campus. She had never met an Indigenous architect before she met Dalla Costa.

“It can be difficult if you don’t see yourself reflected not only in the environment but literally in the curriculum, and you don’t see those histories uplifted and sometimes they’re even invalidated,” she said.

“Hopefully we’re moving away from that. Even seeing physical objects like a table, or anything that references anything Native American, is impactful.”

Martinez has worked with several tribal communities in a variety of design capacities.

“For me, it’s been about, ‘How can our environment help practice our culture? How can we reincorporate culture back into these spaces that have been suppressing that culture?'”

Martinez believes that Indigenous-inspired architecture would respond more appropriately to the climate.

“We are constantly in a heat crisis in the summer, and it seems extreme to put a glass box in the desert,” she said.

“Incorporating more materials like adobe would bring a sense of the context we’re in.” 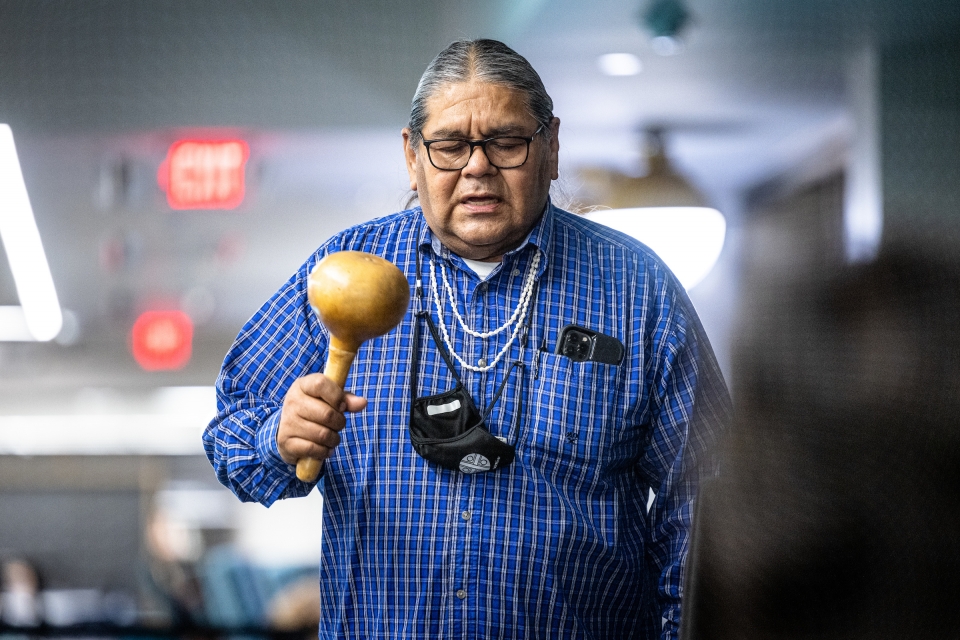 Ricardo Leonard, vice president of the Salt River Pima-Maricopa Indian Community, gave a blessing and sang "Two Rivers," about the spot where the Salt and Gila rivers meet, during the celebration Monday. Photo by Charlie Leight/ASU News

Several tribal leaders attended the celebration. Stephen Roe Lewis, governor of the Gila River Indian Community, said: "This is about making a statement. It’s like we’re taking back our narrative here.

Jacob Moore, associate vice president for tribal relations at ASU, earned his undergraduate and graduate degrees at ASU. He noted that years ago, before the recent renovation at Hayden, the Labriola space was less than inviting and he would study elsewhere.

“This is really a reclaiming of space of our ancestral people and our homelands,” said Moore, a member of the Tohono O’odham Nation.

“This is a gathering space, a space to share among our Indigenous. Having a space where you can be around friends that is inviting is important to students and their success.”

Rosetta Walker, who is Lakota, attended the event and said that she is a member of the Pueblo Grande Museum in Phoenix.

“Every time I go to the museum, I think of the people who inhabited these lands a thousand years ago,” she said.

“If we can pay tribute to them somehow, I think that brings our power back.”