The not-so-positive side of positivity

“At least the play was good,” Mrs. Lincoln never said.

“I've always wanted to visit Europe,” said no one on D-Day.

“We get to swim!” said nobody on the Titanic.

These statements, though fictional, all are examples of a newly named social dynamic — “toxic positivity.”

Essentially, it’s the belief that no matter how dire or difficult a situation is, people should maintain a positive mindset. It’s a “good-vibes-only” approach to life. And while there are benefits to being an optimist and engaging in positive thinking, toxic positivity instead rejects difficult emotions in favor of a cheerful, often falsely positive, facade.

Arizona State University’s Project Humanities hosted a March 25 livestream event titled “Toxic Positivity: The Good, the Bad and the Made Pretty” featuring author and podcast host Nora McInerny, to explore this subject and have an honest conversation about the flip side of positivity.

“To imagine that difficult times can be sugared over is problematic for those experiencing difficult times. I am learning that this is a response people have when we cannot solve a complicated and bad situation, our own or someone else’s,” said Neal A. Lester, founding director of Project Humanities, during the event. “To deny lived emotional responses to negative or bad experiences puts the ‘toxic’ in positivity. This conversation with Nora McInerny – one of the leading popular voices on this topic – was enlightening, funny, and empowering for anyone and everyone wrestling with all the crappiness that life can toss at us.” 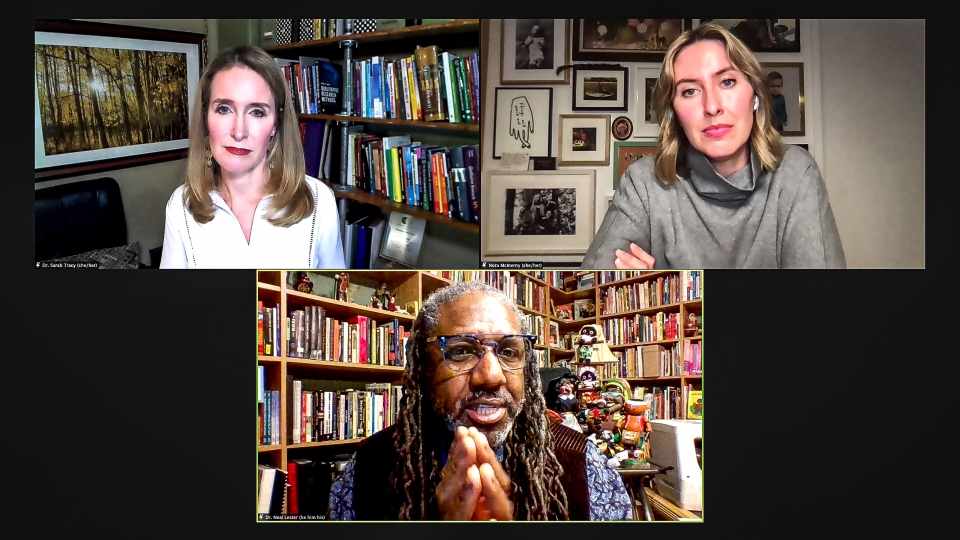 Sarah Tracy, professor of organizational communication and qualitative methodology (top left) and Nora McInerny, author and host of the podcast, “Terrible, Thanks for Asking,” on a March 25 webcast about “Toxic Positivity: The Good, the Bad and the Made Pretty” with Professor Neal Lester (bottom).

Facilitated by Sarah Tracy, professor of communication in the ASU Hugh Downs School of Human Communication, the experts had a wide-ranging 90-minute discussion on life, death, grief, sobriety and how discomfort often makes others uncomfortable.

“Toxic positivity itself is a very American thing,” said McInerny, the author of three books and host of the popular podcast “Terrible, Thanks for Asking.” “Think about the ways in which American culture venerates strength: We pull ourselves by the bootstraps; we are self-made; we are rugged individuals. And if there is ever a struggle, it results in your immediate improvement or success. In reality, does that ring true with you at all? Does that ring true with your life experience? Of course it doesn’t.”

McInerny speaks from experience. In the span of six weeks in 2014, the then 31-year-old McInerny had a miscarriage, lost her father to cancer and lost her husband Aaron Purmort due to a brain tumor. Her life fell apart, and she and her toddler son, Ralph, moved in with her mother.

She worked through her grief but says it was messy. Three weeks after Aaron’s death, McInerny posted happy photos of herself on Instagram, exercising, having a drink and living her best life. The pictures intimated she was moving on with her life and signaled, “I’m fine.”

“We know through all of our social norms and through all of our cumulative experiences that our discomfort makes other people uncomfortable and the best thing we can do is to be OK or pretend to be OK,” McInerny said. “We’re not saying ‘I’m fine’ because we are; we’re saying it because we don’t want to be a burden or a bummer.”

But her Instagram photos were the opposite of her real life. When the lights went out at the end of the evening, McInerny said she reached for alcohol for consolation, binge-watched reality television and cried herself to sleep most nights. She also received a lot of unsolicited advice from family and friends, which she didn’t take kindly to, ending many of those associations.

So McInerny turned to journaling, writing about her experiences as a new widow trying to raise a toddler while exploring her grief. The result was a 2016 best-selling book, “It’s Okay to Laugh (Crying is Cool, Too)” and is considered a leading voice in the modern recovery movement. Today she is remarried and has a blended family.

She said even though she’s “moving forward” with her life, there’s still more work to do – in her life as well as others'.

“The point of the podcast and my work is to get us all more comfortable with not just our own discomfort but with the discomfort of others, which is no way limited to grief or loss,” McInerny said. “In order to heal and grow, and fix anything you have to, you have to be able to identify the ways in which its broken. And we as Americans are not very good at that.”

Near the end of the conversation, Tracy asked, “If you are a recovering ‘positivity-aholic,’ what is one next step you can take next week, tomorrow or even tonight to acknowledge the rainbow of emotion and suffering in the world?” The best answers, as McInerny pointed out, came from the audience itself. Messages in the chat thread read: