Some of the best investigative stories are “hiding in plain sight” and buried just beneath the surface, but the details need to be gold-panned from the stream through documents, records and data, according to Fernando Diaz, a visiting professor at Arizona State University's Walter Cronkite School of Journalism and Mass Communication.

“For me, it’s really about reading between the lines. It’s being a voracious consumer of news and looking for holes, and then over time developing a sense of, ‘Is that a story or is it going to be done by the time I get my shoes on?’” said Diaz, the Edith Kinney Gaylord Visiting Professor in Investigative Journalism. “It might be just trying to find a hole or an opportunity to fill. Or it might just be satisfying your own personal curiosity, but it could end up leading to a major investigation.”

Diaz’s Zoom presentation, “Investigative Reporting That Matters,” was part of the spring 2021 “Must See Mondays” lecture series hosted by the Cronkite School.

“Fernando’s work has consistently sought to expose systemic racial and economic injustice. As our country becomes more polarized and disparities between rich and poor grow, we need more incisive investigative reporting like his,” said Lauren Mucciolo, executive producer of the Howard Center for Investigative Journalism, who moderated the Paul J. Schatt Memorial Lecture on April 12.

The Schatt series was started in 2007 to honor the late Paul Schatt, who was a reporter, editor and columnist for the Arizona Republic for five decades and an adjunct professor at the Cronkite School who taught public affairs reporting for three decades.

The series is funded by an endowment created by his widow Laura Schatt-Thede and an annual gift from the Arizona Republic. 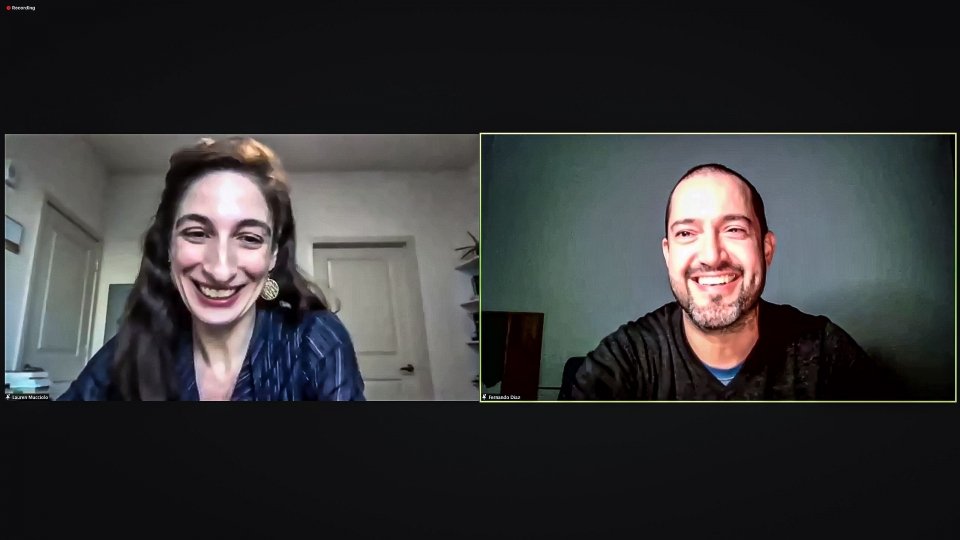 Lauren Mucciolo, executive producer of the Howard Center for Investigative Journalism at ASU (left), talks with Fernando Diaz, the Edith Kinney Gaylord Visiting Professor in Investigative Journalism on April 12 for the Paul J. Schatt Memorial Lecture, during the Cronkite School’s Must See Mondays webcast. Diaz has crisscrossed the country through his career, beginning as an intern at the Chicago Reporter and ending up there again as publisher. The two spoke on topics such as the continued need for diversity in journalism, mentorship and how to file a FOIA request.

Diaz offered insights on his work, career and the current state of investigative reporting, especially in areas of race, poverty and income inequality. Diaz, a first-generation American, has worked in a variety of roles at many newspapers and nonprofit news organizations, including the San Francisco Chronicle and the Chicago Reporter. Diaz is a member of Investigative Reporters & Editors as well as a lifetime member of the National Association of Hispanic Journalists. He said good journalists are not complacent and are not afraid to relocate to improve their craft.

“I’ve had a very itinerant career, and I think that’s been a blessing and a curse,” said Diaz, who in addition to being an investigative reporter has been a multimedia journalist, editor and publisher. “One of the things you can do as a journalist is move around a lot. I tended to get picked up or find something new … I figured if I stayed, I might get better as an investigative reporter but may not have an opportunity to do things like audience engagement or production or interactive.”

Diaz, who has written stories to expose injustice, hold people in power accountable and improve the lives of others in his community, said there is room for improvement in newsrooms regarding diversity.

“I’ll try not to make very many assumptions but we can all appreciate that there is a lack of diversity in journalism. What we have is a lack of parity,” Diaz said. “I can realistically count all of the (diverse) editors in investigative journalism that I know on both hands, and have fingers left over. Then you go to executive directors, publishers and CEOs, and I think I know them all – and I still have fingers left over.”

Diaz said the only way to change this dynamic is to create spaces for men and women of color and hire them in key positions.

“The last 15 years of our industry we’ve been so focused on fixing the problem and we still haven’t fixed it,” Diaz said. “We need on-ramps.”

Diaz pivoted from the newsroom to academia in 2020 when he was hired by the Cronkite School to teach investigative skills and long-form storytelling, and to help get students’ work published at news organizations such as the Arizona Republic. He said it’s been a pleasant surprise so far.

“I didn’t expect to go into teaching and then this opportunity came up and it really spoke to me in ways that I have never really thought of before,” Diaz said.

As for students, Diaz said they should focus on doing good work under people who will bring out the best in them, develop key relationships throughout their career, and enjoy the ride.

“The thing is the jobs that you’re going to end up having is a stage in your journey,” Diaz said. “The point is not completing the journey. The point is embracing the journey and learning from those stages because each of those stages, whether it’s a person or a technique or a community is going to teach you something different."

His other advice: "If the door closes, find a window. If the window closes, find a back door. If all the doors and windows are closed, build your own house.”