This week, Sun Devils who have served or continue to do so can enjoy the sounds of rock, rap and classic soul.

Arizona State University's Salute to Service 2021 concert is going back to a live format, featuring headliner Teddy Swims, an Atlanta-based singer-songwriter and Warner Brothers artist, and rap artist Samara Cyn, who is slated as the opener and is an ASU alumna.

Tickets are available now and are also open to the general public.

“Music always brings people together, and what better way to celebrate and honor all those who have served and continue to serve than having a concert?” said Michelle Loposky, director of student success and partnerships from the Pat Tillman Veterans Center. “We are not only thrilled to have Teddy Swims here but one of our very own, Samara Cyn, perform. To say I am proud of her is an understatement.”

The concert at Sun Devil Stadium will start at 8 p.m. Nov. 2, near the start of the nearly two-week Salute to Service, which runs Nov. 1–11 with a variety of recognition activities highlighting selfless service by students, faculty and staff. This year’s theme is Sun Devils who put “Service Above Self.” For the latest information and a complete schedule of events, visit the Salute to Service website.

Swims rocketed to fame in 2019 when he began streaming cover songs from his bedroom studio. His renditions, which showed off his powerful vocal range, became an internet sensation on YouTube. With his signature style of soaring soul, intimate R&B, rock energy and hip-hop swagger, Swims soon developed a fervent following with over 4 million people. A record deal beckoned, as did profiles in national publications such as Rolling Stone and Billboard magazines. Swims has also appeared on “The Kelly Clarkson Show” and “Late Night with Stephen Colbert.”

The Salute to Service Concert is part of Swim’s “Tough Love” worldwide tour, which has taken him around Europe and throughout the United States. 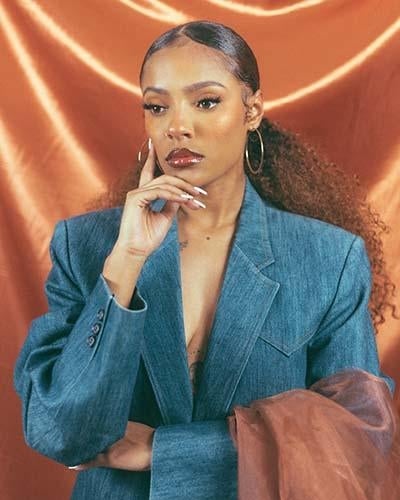 Cyn, who is an ASU alumna and military dependent, is at the start of her career and hopes to emulate Swim’s success. She said she’s looking forward to the ASU concert.

“Getting to be able to perform for veterans and others who serve is a full-circle moment for me,” said Cyn, who graduated in May with a bachelor’s degree in supply chain management in the W. P. Carey School of Business. “Because we were in the military, I was exposed to different sounds of music.”

Cyn credits her mother and father, the latter an Army veteran, for introducing her to music and encouraging her to take a chance on a musical career – but only after she received her degree.

“I now have a bachelor’s degree to lean on, and I can always come back and get my master’s at some point,” Cyn said. “But for now, I need to focus on me and take risks, get some experience and travel. Right now, I’m just doing me.”

Cyn also cites ASU as the place where she found her passion for music.

“Before my sophomore year, I kept telling myself that music was just my hobby,” said Cyn who volunteered and tutored student veterans at the Tillman Center while attending ASU. “Then it took another year for me to believe I could do this as a living. I had strong levels of self-doubt. I’m a realist at heart, and it’s been a struggle at times. But I finally let go.”

That moment occurred on July 17, 2021, when Cyn performed at the Crescent Ballroom with Phoenix-based band Prime Society, Jiggy James and Pat Kanji. They did a 90-minute set together, and Cyn said everything clicked for her that night.

“I was just doing it and wasn’t overthinking it,” Cyn said. “It was an amazing show, and the music just flowed. I was singing, and it was this beautiful night of creativity between me and the band. All of this stuff that had been building inside of me just fell to the side. From that point on, I was super comfortable with the idea of doing this full time.”

She hopes to have another one of those nights on Nov. 2.

“Veterans have high standards and are disciplined in their lives, but they also know how to let go and have a good time,” said Cyn, who will be backed by The Clazzmates featuring the Kaleidoscope Kid on guitar. “We’ve been going hard in rehearsals, and I’m not playing around. This show means a lot to me because of who I’m playing for.”

Cyn said veterans will recognize in her two simple traits: authenticity and compassion.

“I think it’s important to be an example of what love is because we’re in an age where everybody is sort of stuck in their own head,” Cyn said. “So love means being compassionate and understanding to everyone around you because you never know what another person’s reality is.”