In a story that took the world by storm, a downtrodden yet cunning lower-class family infiltrates a wealthier neighborhood’s home. Then all hell breaks loose.

If this sounds like the setup of 2019’s Academy Award-winning film sensation “Parasite,” you’d be right. But it could also pass as a plot driver for one of the most diverse animal groups on earth: ants.

Christian Rabeling, Arizona State University researcher and associate professor of organismal evolutionary biology, can now tell a story 30 million years in the making, of a myrmecological marvel, the evolution of social parasitism in ants.

He and his team, including colleague and former postdoctoral researcher Marek L. Borowiec, now assistant professor at the University of Idaho, and long-term friend and colleague Stefan P. Cover, safekeeper of the world’s largest ant collection at the Museum of Comparative Zoology at Harvard University, have now revealed the latest plot twists to understanding the origins and evolution of ant social parasitism.

“Identifying the conditions associated with ant life history and their transition from cooperative colony life to exploitative social parasitism is important for understanding how changes in behavior contribute to speciation,” said Rabeling, a professor in ASU’s School of Life Sciences and a core researcher in the universities’ social insect group.

Rabeling is fascinated by social parasitism, first studying this behavior in leaf-cutter ants and now, in his latest study, one of the most diverse groups of all: Formica ants.

“So, the first question was, how did Formica ants evolve? No one had done a detailed phylogenetic analysis that looked into that,” Rabeling said. 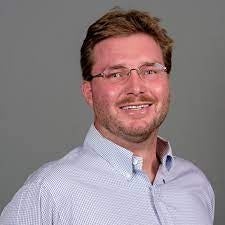 First, a group of Formica ants lost their ability to form the hub of ant life — colony formation — independently. Once this ability was loss, a shift to two other more complex types of social parasitic behaviors took place.

“Here, we demonstrate that social parasites evolved from an ancestor that lost the ability to establish new colonies independently, and that highly specialized parasites can evolve from less complex social parasite syndromes,” Rabeling said.

And like most successful Hollywood movies, once a successful formula was proven, Rabeling found this same ant plotline was repeatedly borrowed, again and again.

“Social parasitism is a life history strategy that evolved at least 60 times in ants, and more than 400 socially parasitic species are known from six distantly related subfamilies,” Rabeling said.

The study appears in the online edition of the Proceedings of the National Academy of Sciences.

Among the 14,000 different ant species to study, Rabeling chose one of the largest and most diverse groups of ants, Formica ants. There are 172 species within this supergroup (or genus), with half exhibiting social parasitic behavior, making it one of the largest on Earth.

Their first step to seeing a bigger picture of Formica social parasites was to make a global evolutionary tree to better understand the historical relationships between the species, and a window into how different species became social parasites.

To make a Formica evolutionary tree, or phylogeny, scientists look at the DNA level to make branching relationships between the Formica ant species and an understanding of the inheritance of traits that control social behavior and diversity.

To do so, Rabeling’s team collected DNA samples from 101 Formica species (representing all 10 known species groups) across a global geographic distribution and carefully calibrated these data across evolutionary time. Rabeling’s team collected DNA samples from 101 Formica species across a global geographic distribution and carefully calibrated these data across evolutionary time. This ant supergroup was one of the most successful in the history of life, first originating in the Old World around 30 million years ago and dispersing multiple times to the New World and back.

They showed this supergroup was one of the most successful in the history of animal life, first originating in the Old World around 30 million years ago and dispersing multiple times to the New World and back as land bridges came and went.

From their analysis, they found that Formica last shared a common ancestor with its sister group, Iberoformica, around 33 million years ago and likely originated in Eurasia during the Oligocene era, after a long global cooling period.

The hub of ant life is the colony. Beneath the mound of a typical ant hill is a netherworld that can extend several feet deep underground in an intricate ant subway system of tubes and tunnels.

Ants are also very adaptable. They can live in trees, under boulders or entirely underground, sans hill.

The typical colony consists of one or more egg-laying queens, numerous sterile females (workers, soldiers) and, often seasonally, many winged sexual males and females. Colonies can differ in size, from rural to mega city-sized. For example, in the species F. fusca, colonies are found with only 500 workers, while the F. yessensis species has mammoth colony sizes of 300 million workers.

Ants exhibit all sorts of social behavior that often make for apt allusions to people. Some are good: living peacefully in colonies, cooperating to find food, caring for their young and defending the nest against rival species. But others have become bad actors: raiding rival nests, zombifying other worker ants and enforcing a caste system to benefit the monarchy of an all-too-dominant queen.

There are three major classes of social parasites in ants that serve to exploit the host colony for their own gain: 1) temporary, 2) dulotic (pirate ants who steal the worker brood of other nests) and 3) permanent social parasitism.

“We were looking for an ant group where we could find all three life histories, and we found it with Formica ants,” Rabeling said.

And when they carefully annotated all of the life history data for each Formica species in a gigantic table, and lined that up with the DNA timeline of when the species first split and made new evolutionary branches from each, an important pattern began to materialize: the three major classes of social parasites evolved at distinct, yet clearly separate timepoints.

“This was a moment of clarity,” Rabeling said. "It’s like you have all these different mosaic pieces. You place one stone here, another stone there and then there’s a new observation that adds yet another piece to the mosaic. But once you put in the evolutionary time context, all of sudden, you can see the entire picture. It’s deeply satisfying.” 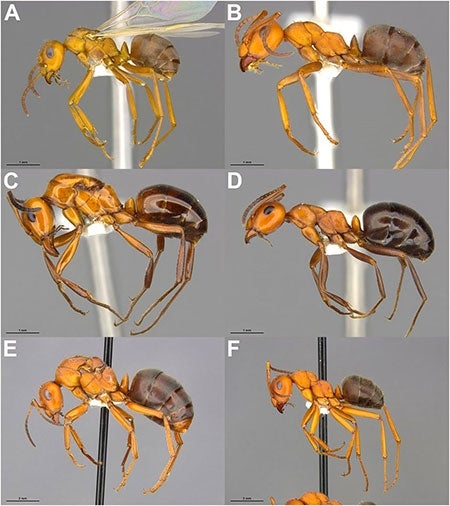 Rabeling showed that temporary social parasitism evolved first, around 18 million years ago. The first key step in this process is that the queens somehow lose the ability to form colonies on their own.

So, the queens of temporary socially parasitic ant species invade the host nest, kill the resident queen(s), and the host workers raise the parasitic queen’s offspring. In the absence of an egg-laying host queen, the host workforce is gradually replaced until the colony is composed solely of the temporary social parasite species.

“Interestingly, evolutionary reversals from social parasitism to independent colony founding were not recovered, suggesting that a transition to a socially parasitic lifestyle is irreversible,” Rabeling said.

After this main event, more recent branches (or clades) of socially parasitic species have secondarily transitioned to the other parasitic life histories, dulotic and permanent social parasitism.

In the second example, the queens of dulotic social parasites start their colony life cycle as temporary social parasites, and once sufficient parasitic workers have been reared, they conduct well-organized raids of nearby host nests to capture their brood. Some brood are eaten, but most workers hatch within the parasite’s nest and contribute to the workforce of the colony.

“They think they are right at home, so they don’t even recognize that they are in a different species’ nest,” Rabeling said.

“The single origin of dulotic behavior in a diverse clade of temporary social parasite species supports the hypothesis that dulosis originates only under rare circumstances,” Rabeling said. Rabeling notes that even Charles Darwin threw his hands up in the air when trying to explain one species of dulotic ant in his “On the Origin of the Species” book.

A sketch of a Formica ant by Charles Darwin.

“By what steps the instinct of F. sanguinea originated I will not pretend to conjecture,” Darwin wrote.

Rabeling marvels at this history: “It’s really beautiful that you can trace the ant question all the way back to the 'Origin of Species.'”

Since that time, three not entirely mutually exclusive hypotheses have been proposed to explain the origins of this highly specialized behavior: 1) predation, 2) brood transport and 3) territorial competition.

“Our phylogenetic results and behavioral observations indicate that the predatory behavior of temporary social parasites could lead to the evolution of facultative dulosis in Formica,” Rabeling said.

Finally, in the last example, most permanent social parasite (i.e., inquiline) species are tolerant of the host queen, allowing her to continuously produce host workers, whereas the inquiline queens focus their reproductive effort on sexual offspring.

Rabeling explains the complex behavior as follows: “In this particular situation, you have a queen that behaves parasitically, and the queen that behaves socially. And for reason we don’t understand, the two do not integrate. So, even though they exist in the same nest, they live parallel but separate lives and end up forming two species: the host and the inquiline social parasite. This is an intriguing example of how two species evolve in direct sympatry, and their different life histories is one important factor why they do not interbreed.”

Inquilines obligately depend on their hosts, and most inquiline species lost their worker caste entirely.

The only confirmed workerless inquiline social parasite in the genus Formica is F. talbotae. However, F. talbotae is special because it does not live peacefully together with a host queen inside the host colony. It seems to specifically target host colonies that have lost their queens. This is an extremely specialized lifestyle that is only known from a couple of other ant species.

“Formica talbotae is phylogenetically nested within the difficilis clade, suggesting that worker-less permanent parasitism evolved once from an ancestor practicing temporary social parasitism,” Rabeling said. “To our knowledge this is the first empirical evidence for an evolutionary transition from temporary to workerless inquiline social parasitism.”

For, on the evolutionary route of social parasite evolution, highly similar plots for the parasitic life history syndromes across all eusocial insects can lead to a new best picture emerging.

“Our study outlines the life history changes associated with the transition from a cooperative eusocial to exploitative socially parasitic life history,” Rabeling said. “Given the high diversity of social parasite species in the genus Formica, and considering the high degree of morphological and behavioral specialization, socially parasitic Formica species appear to be an ideally suited study organism for investigating caste determination and for exploring the genetic basis underlying behavioral and life history evolution.”

These ant observations, gained from extensive fieldwork and studying the life history of individual species behaviors, have informed the scientific community for decades. But now, with scientific technological progress and access to low-cost DNA sequencing, for the first time, it has opened up an exciting new vista to make it possible to better link ant behavior to genes and molecules that may be playing a role behind the scenes.

“For us, this is a fantastic period right now,” Rabeling said. “Just the ability to ask these questions was probably the most exciting part of this study.”

The opportunity to produce a more holistic picture of social behavioral evolution propels and thrills Rabeling.

It has been a prime motivation for Rabeling, who once did his postdoctoral studies with famed sociobiologist E.O. Wilson. And since coming to ASU five years ago, he will continue to specialize in understanding the underpinnings of parasitic ant behavior.