Newsrooms would do well to embrace workplace issues surrounding LGBTQ rights, personal identity and creating more gender inclusive content because it leads to more accurate and nuanced coverage as well as a deeper understanding of the communities in which they live, according to national transgender media journalist, podcaster and audio producer Oliver-Ash Kleine.

“I think that every newsroom should hire someone to do education around trans issues because the reality is that a lot of reporters and editors just aren’t going to do it themselves and don’t have the knowledge,” said Kleine, founder of the Trans Journalists Association (TJA), an online community of 400-plus reporters, and producer of the award-winning podcast "Brave, Not Perfect" with Reshma Saujani. “When you don’t have trans people in your newsroom, your trans coverage isn’t going to be very good.”

“Journalists are in a critical moment of confronting past failures to provide nuanced, empathetic coverage of many communities and to cultivate inclusive newsroom cultures,” said Blatt, who a decade ago was Kleine’s co-worker at WAMU 88.5 FM, a public radio station in Washington, D.C. “Trans communities often have been misrepresented or excluded from newsrooms and news coverage, and that has to change. Oliver-Ash Kleine has been at the forefront of efforts to make news coverage and newsroom staffs more inclusive of trans people, and I am thrilled to have them join us for this important conversation.” 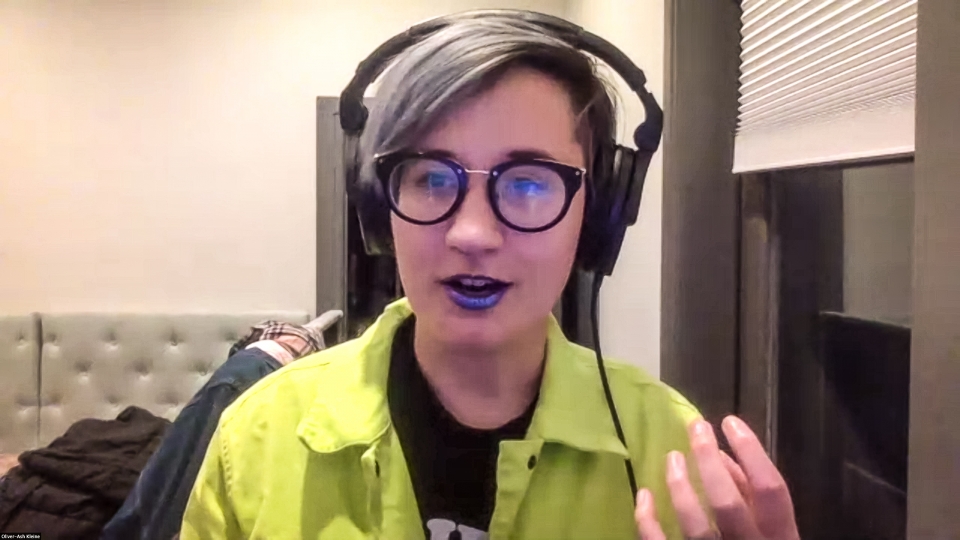 Oliver-Ash Kleine talks about trans and nonbinary gender identification, and respect in content and workplaces, during a Must See Mondays webcast on March 22. Kleine develops podcasts, such as TransLash Podcast with Imara Jones, for trans news and culture with the goal of empowering trans audiences and educating families and friends. Cronkite School Senior Associate Dean Rebecca Blatt moderated the conversation. Photo by Charlie Leight/ASU News

Kleine, who uses they/them pronouns, said most journalists don’t know how to cover trans communities and when they do, their stories are often harmful or disrespectful and misgender people. Kleine said when Chelsea Manning asked in 2013 to be identified with she/her pronouns, it led to a big fight with an editor.

“I remember walking into the newsroom — I had the afternoon shift — and learned that we were using the wrong pronouns for her (Manning) … and I was like, ‘What? We can’t do this,'” Kleine said. “So I went to have a conversation with our news director and we got into a fight. I had never fought with my news director like that before. And we fought for an hour … we went at it. Fortunately, I had a really good relationship with her. Ultimately, the best I could get was a compromise: We wouldn’t use pronouns at all. I didn’t like the solution.”

That was a pivotal moment for Kleine, who said they suddenly felt alienated and alone in the newsroom. Kleine pitched stories about the trans community and kept getting rejected by editors.

“When I came to better understand myself as trans, I thought, ‘Well, we gotta fix some stuff,” Kleine said. “I felt as if I actually can have a voice in this because I’m part of this community.”

When Kleine couldn’t find a physical space where trans journalists could meet, they created a Facebook page, which later became a Slack community. They eventually morphed into the TJA and soon began offering support to trans journalists in their workplaces and careers, providing guidance to newsrooms for more accurate coverage of trans communities, and providing tools to help employers make their workplaces more supportive for trans employees.

Kleine said with the exception of Vox and NPR, which have already made great strides in this area, newsrooms are slowly coming around. However, the trans community is not waiting on them. They said trans journalists like Imara Jones and Tuck Woodstock are emerging as national figures, creating essential content and talking about important issues.

“We’re in this really unique time where for the first time people who have historically been underrepresented in our industry are starting to gain power, which is incredible,” Kleine said. “And it’s great.”

“I’ve seen so few stories about trans people thriving and living well,” Kleine said. “Being trans is the best part of my life.”

Top photo: The transgender flag was created in 1999 by Monica Helms, an American transgender woman. The light blue and light pink are the traditional colors for baby girls and baby boys, respectively, while the white represents intersex, transitioning, or a neutral or undefined gender. According to Helms, the flag is symmetrical so “no matter which way you fly it, it is always correct, signifying us finding correctness in our lives.” Photo courtesy of iStock/Getty Images.