About 2.4 billion years ago, Earth’s atmosphere underwent what is called the Great Oxidation Event (GOE). Prior to the GOE, early Earth had far less molecular oxygen that we have today. After the GOE, molecular oxygen began to increase in abundance, eventually making life like ours possible.

For decades, researchers have tried to understand why and how the GOE occurred.

A team of scientists, led by James Andrew Leong with Tucker Ely (both of whom earned their doctoral degrees from ASU’s School of Earth and Space Exploration in 2020) and ASU Professor Everett Shock, has determined that weathering rocks might have contributed to the GOE. Their results were recently published in Nature Communications.

Molecular oxygen is produced by plants and photosynthetic microbes, but molecular oxygen is also consumed by organisms and by the oxidation of iron, sulfur, carbon and other elements in rocks. Molecular oxygen can also be consumed through reaction with reduced gases like hydrogen, which can form during rock weathering.

Scientists studying the early Earth hypothesize that the consumption of oxygen was perhaps more rapid than the production of oxygen by photosynthesis, so oxygen was not able to accumulate in the atmosphere.

“It’s like when your bills exceed your income, money can’t accumulate in a savings account. This appears to have been the situation on the early Earth,” said co-author Shock, of ASU’s School of Earth and Space Exploration and the School of Molecular Sciences.

For the GOE to occur under this hypothesis, the consumption of oxygen had to slow with time, so that oxygen could build up in the atmosphere.

Given that, Leong and his team set out to determine what processes could be slowing down the consumption of oxygen on the early Earth to produce an increase in oxygen.

“We know it’s probably not biological consumption, which does a decent job of keeping up with oxygen production by photosynthesis,” Shock said. “So we thought maybe the rate that oxygen was consumed by the weathering of rocks was creating this change.”

To test their hypothesis, Leong and his team focused on the weathering of a type of rock known as “ultramafic,” an igneous rock, rich in magnesium and iron, with very low silica content.

Ultramafic rocks comprise most of the Earth's upper mantle, where they were formed at high temperatures. When these rocks are brought to the surface and come into contact with water, the waterless minerals that make up these rocks transform into minerals containing water. This process is called serpentinization, after the main replacing mineral, serpentine. The process also transforms the reacting groundwater into a highly alkaline water with elevated gas content, in particular, hydrogen.

They were inspired to do this by research they had conducted previously on hyperalkaline and gas-rich fluids found in the ultramafic mountains of present-day Oman that was published in the AGU’s Journal of Geophysical Research in 2021. 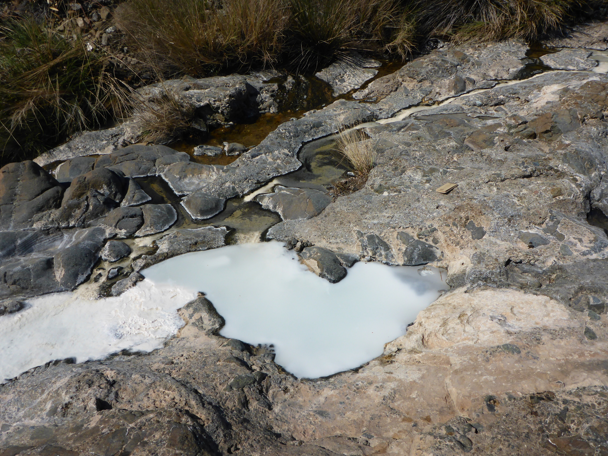 Chemical reactions between ultramafic rocks and groundwater led to the formation of highly alkaline water, which can discharge back into the surface. At the surface, these fluids react with carbon dioxide from the atmosphere to form calcium carbonate, which are the white minerals seen here from a field study the authors conducted in Oman. Credit: Leong/Shock/ASU

“Our previous field research in Oman led us to wonder what the early Earth surface and atmosphere would have looked like when high pH and hydrogen-rich fluids were as common as today's near-neutral pH groundwater and rivers," Leong said. “Ultramafic rocks like those found in Oman are rare in the Earth’s surface at the present-day, but were abundant during the hotter early Earth.”

For their analysis, they conducted computer simulations, based on a computer code that co-author Ely developed, to predict the hydrogen generation potentials of thousands of rock compositions that were common during the early Earth. From there, they could then draw connections between rock compositions and their potentials to generate hydrogen and consume oxygen.

With those simulations, the team then was able to reconstruct the global hydrogen production and oxygen consumption rates via serpentinization during early Earth and determine that the weathering of ultramafic rocks could have helped facilitate the GOE.

“We were able to model the alteration of thousands of rock compositions that are likely to be present on the early Earth,” Leong said. “Our calculations show that many of these rocks, especially those that are really ultramafic in composition or rich in magnesium, like those found in Oman today, have very high potentials to generate hydrogen gas and help prevent accumulation of oxygen. The decline in the abundance of ultramafic rocks in the Earth’s surface towards the end of the Archean eon could have helped facilitate the Great Oxidation Event.”